“As you might have guessed, I think World Trade Center is the first serious contender to be nominated for Best Picture this year,” David Poland wrote last night after slipping into an even-earlier screening than the earliest one I was told about yesterday…harumph. (Before we go any further, it’s clear what David’s saying but it would’ve been a better sentence if he had inserted “that deserves” after the word “contender” and before the word “to.”) 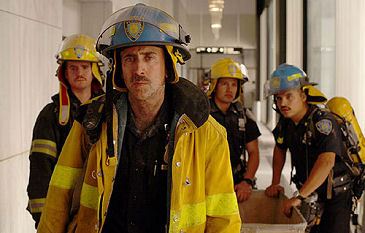 “I hate the release date,” Poland continues. “It really feels to me like a November movie. I wanted the sharp sting of cold air on my face as I walked out into the street.” (Except there are no sharp stings to be had from Los Angeles weather …ever. Poland is dreaming about seeing WTC in Chicago around Thanksgiving.)
“I wanted a hot drink and a long conversation with a fire crackling nearby. This is a heavy, heavy movie to be hitting America in August.” (I don’t know what that means at all. August is a time for all God-fearin’ folks to emotionally sidestep anything that isn’t Snakes on a Plane or Sherrybaby ?)
“But the weight I felt on my chest walking out of the theater was much like the weight I felt after Munich …” (thud, penalty buzzer) — “after Amadeus, after Million Dollar Baby, after In The Bedroom , after The Pianist, after In America. ” (I’m presuming Nic Cage doesn’t have any Paddy Considine “fee-fi-fo-fum” lines in WTC.)
“It was the weight of something that touched me in a deep, almost inexplicable way, greater than the sum of its parts.” (I know what this feels like when a movie kicks in just the right way, and seems to gather force in your chest the more you think about it afterwards, and yet you can’t quite figure exactly why.)
Anyway, point taken. I’m pumped, as other perhaps are. World Trade Center opens three weeks and one day from now — on Wednesday, August 9th.