In order to qualify Marina Zenovich‘s Roman Polanski: Wanted and Desired for a Best Feature Documentary Oscar, HBO has, like, sneak-booked it into the Coliseum Cinemas on West 181st Street in Washington Heights. A similar-type booking is now happenign at Laemmle’s One Colorado in Pasadena. (Thanks to HE reader “RP” for the information.) 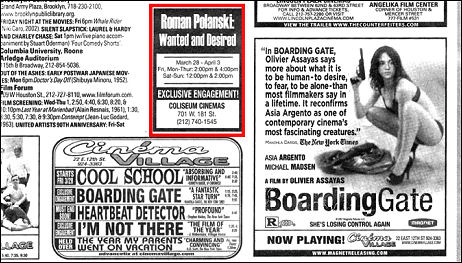 Defamer‘s Stu Van Airsdale spotted the New York-area ad and ran a JPEG of same. Good reporting. He’s wrong, however, in describing the doc, one of the four or five best films at last January’s Sundance Film Festival, as one that “painstakingly makes the case that Polanski’s conviction for unlawful sexual intercourse with a minor was a travesty.”
That statement implies that Polanski was innocent and therefore shouldn’t have been convicted. As I wrote last January, the film “doesn’t take Roman’s side of the mid ’70s unlawful-sex-with-a-minor scandal that led to his leaving this country as much as it slams the judge who ignored justice in his handling of the case.”
As VanAirsdale points out, HBO Documentary Films purchased Roman Polanski: Wanted and Desired at Sundance for $1 million, “planning a cable premiere and a DVD release — but no theatrical run. Except that to qualify for an Oscar, you have to screen ‘for a minimum of seven days in both Los Angeles County and the Borough of Manhattan.'” Hence the current bookings.