“To describe Moonlight (A24, opening today), Barry Jenkins’ second feature, as a movie about growing up poor, black and gay would be accurate enough. It would also not be wrong to call it a movie about drug abuse, mass incarceration and school violence. But those classifications are also inadequate, so much as to be downright misleading. It would be truer to the mood and spirit of this breathtaking film to say that it’s about teaching a child to swim, about cooking a meal for an old friend, about the feeling of sand on skin and the sound of waves on a darkened beach, about first kisses and lingering regrets. 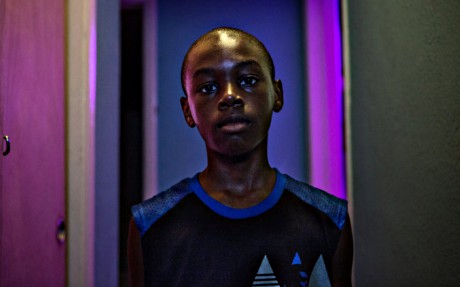 “Based on the play ‘In Moonlight Black Boys Look Blue’ by Tarell Alvin McCraney, Moonlight is both a disarmingly, at times almost unbearably personal film and an urgent social document, a hard look at American reality and a poem written in light, music and vivid human faces.

“[Jenkins] does not generalize. He empathizes. Every moment is infused with what the poet Hart Crane called ‘infinite consanguinity,’ the mysterious bond that links us with one another and that only an alert and sensitive artistic imagination can make visible. From first shot to last, Moonlight is about as beautiful a movie as you are ever likely to see. The colors are rich and luminous. (The director of photography is James Laxton.) The music — hip-hop, R&B, astute classical selections and Nicholas Britell’s subtle score — is both surprising and perfect.” — From A.O. Scott‘s 10.20 N.Y. Times review, titled “Is This the Year’s Best Movie?”

HE to Scott: “As an admirer of Moonlight to a certain degree, I’m not understanding why you’re doing handstands and cartwheels over this thing. Yes, it’s enterprising (three acts, three stages of life) and novel, but take away the novelty (black gay kid in drug-affected Miami subculture) and what would it be? What if it was about some gay hillbilly white kid in the Ozarks? It plays its own music and owns a particular space, but there’s not a lot of ‘there’ there. I get the thumbs-up but best film of the year? Highly debatable.

“Moonlight is worthy of praise and respect, but at the end of the day I liked Moonlighting a lot more.” 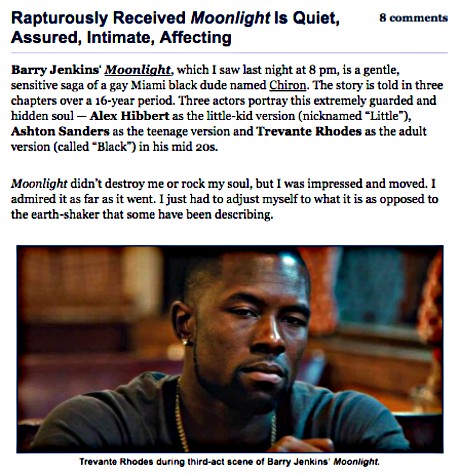