This rave Avatar review in London’s The Sun doesn’t sound like the writer (a.k.a., “the Sneak”) is invested in anything other than crude enthusiasm and wanting to encourage those who are hoping that James Cameron can do it again. He may be telling the truth, but his words sound too cheerleader-ish, too eager-beaver. 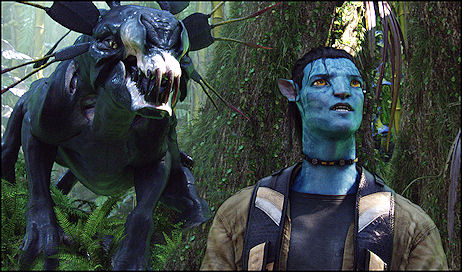 I am, however, moved by the following passage: “The final battle scene is 20 minutes long and absolutely mind-blowing. The Sneak still recalls sitting in a cinema 12 years ago watching awestruck as Titanic slipped beneath the Atlantic waves. And your critic is sure that, even when he is pushing a Zimmer, he will remember the moment the main spaceship of the baddie corporation goes down in Avatar.

“It is overwhelming, and that is because you are emotionally tied up in the characters and the story.”