Wait a minute…Curtis Hanson‘s Lucky You (Warner Bros., 9.8) is opening in six weeks? It’s a presumably well-written gambling flick (how can it not be with Hanson having collaborated with screenwriiter Eric Roth?) about a bigtime poker player with issues working against him. Hanson (In Her Shoes, 8 Mile ) has cast Eric Bana, Drew Barrymore, Robert Duvall and Debra Messing in the lead roles. You will obviously open during the Toronto Film Festival but it won’t be part of it, I’ve been told. 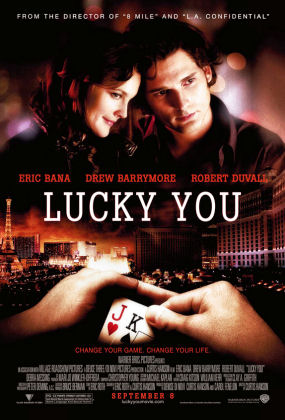 The trailer, which started playing in theatres last weekend, is now online at the AOL Moviefone site. But you need the dreaded Mozilla Active X plugin to see it and I’ve found it impossible to download this damn thing so I’m out of luck. WB should make it available through a different viewing software.
I’m one of those odd ducks who hates actual gambling — losing money to some guy across the table who has a better hand or is a better buffer makes me want to punch a refrigerator (especially if it’s the latter) — and yet I love good gambling movies like California Split, Rounders and The Gambler , so I’m pretty stoked about this one. Theoretically, I mean.
The only thing that gives me slight concern is the Bana karma. He’s only starred in two U.S.-made films thus far (The Hulk, Munich) and as far as I’m concerned they were both stiffs. I liked Bana in his modest role in Black Hawk Down and he was great in the Australian-made Chopper (which launched his career) but he doesn’t seem to have any heat right now. I hope Lucky You changes this, but so far the cards have been cold and the dice haven’t been rolling.