Every now and then the HE agenda allows for an off-topic footnote, and here’s a two-sided one about today’s (7.3.07) L.A. Daily News story about a months-long affair between L.A. mayor Antonio Villaraigosa and Telemundo anchorperson and news reporter Mirthala Salinas. 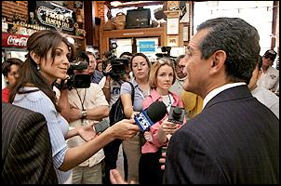 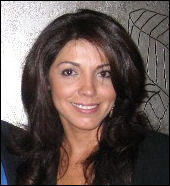 It would be truly refreshing if everyone would just shrug this story off (i.e., the way Europeans reportedly do when stories about their own politicians’ messy and/or eccentric personal lives gets out) and get back to work. Politicians are entitled to be people and should be left alone when their private stuff pokes through.
But as Robert De Niro‘s Neil Macauley character says in Heat, “There’s a flip side to that coin.” A story about an extramarital affair between two power-magnet types is always interesting, which in this case is a euphemism for pulse-quickening. Especially when the woman involved is a TV newscaster. Local TV news producers the world over always hire hotties in their late 20s and 30s to report news and handle anchor duties. They know there’s a certain transportation of erotic energy that comes across (and that this usually shows up in the ratings), so it’s always intriguing when a youngish woman whom hundreds of thousands of viewers feel they “know” in this sense is revealed to be a normal person with the usual drives and vulnerabilities.
Okay, “pokes through” was probably a Freudian pun. I knew a married guy in Westport, Connecticut, in the early ’80s who had a girlfriend on the side. He told me the day after one of his assignations that he’d told his wife he was going out to play “poker”, and how he felt on a certain verbal level that he was being honest. The guy had never grown emotionally past junior high school.