For a recent meeting in Manila with Phillipine president Gloria Macapagal Arroyo at the Presidential palace, Quentin Tarantino wore “a traditional Filipino formal shirt called Barong Tagalog but [ also] wore sandals,” says an 8.16 report in The West. “He was handed size 13 black leather shoes because sandals and rubber shoes are not allowed inside the palace during presidential ceremonies, a staff of the National Commission on Culture and Arts said.” 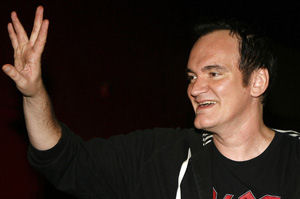 What kind of an elitist swaggering attitude do you have to have to figure it’s cool to wear sandals to a meeting with a chief of state? Was Tarantino brought up in a barn? Anyone with a vestige of breeding would arrive for a meeting with any head of state wearing at least a sport jacket and some kind of leather footwear. The guy’s an animal.