I was going to ignore David Poland‘s vitriolic slam of The Assassination of Jesse James by the Coward Robert Ford out of concern that a tit-for-tat would convey an impression of too much respect, but I’ve been urged to take a poke anyway. 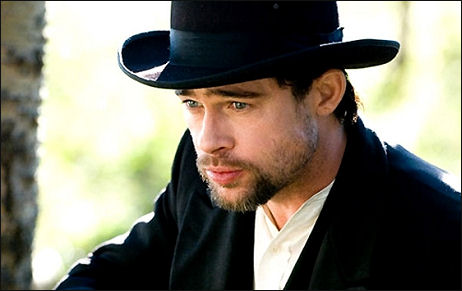 “Like” it or not, Andrew Dominik‘s deeply atmospheric moralistic western about the last days of Jesse James (Brad Pitt) and the tragedy of “groupie” Robert Ford (Casey Affleck) is a time-machine passage to the way life in rural and urban Missouri (and to a lesser extent New York and Colorado) quite possibly felt, tasted, smelled and sounded like some 135 years ago. It feels utterly real, convincing, lived-in…and at the same time is a chocolate sundae of awesome style and immaculate flavor.

And yet Poland has called it “the most pretentious studio release in a decade.” I don’t know where derision of this sort comes from in people. Films of this calibre and pedigree sometimes strike people as poised and overbearing. I remember talking to a bartender at the Spring Street Bar & Grill 29 years ago about how he’d dismissed Days of Heaven as masturbatory, self-important shite. I developed an instant dislike for the guy at that moment, but I also felt twinges of pity. He didn’t have it in him to get it, is all. If you reach high and achieve big, somebody is going to come along and slap you with the “p” word and there’s nothing to be done about it.

Poland accuses Dominik of having ripped off Terrence Malick, Robert Altman‘s McCabe & Mrs. Miller, Michael Cimino‘s Heaven’s Gate, Sam Peckinpah‘s Pat Garrett & Billy The Kid and so on. The natural process of every artist is to take, assimilate and make anew. Dominik’s film certainly has the echoes of ’70s cinema all through it, but anyone who looks at Jesse James without understanding that he’s delivered a very particular feast of his own — similar, yes, but a long way from being shamelessly borrowed — and then calls it “obnoxious” and “taste-free” is coming from a numb and enervated place.

I can only throw up my hands at the taste buds of someone who would use these terms to take down one of the most potent dream trips ever released by a major studio (dreamy in a gently musty, burnished, lace-curtain-y sort of way) while having previously creamed over The Proposition, a movie that was so caked in pretentious grit (with each and every actor covered in makeup-van “chicken grease”) that I went home and took two showers after seeing it. 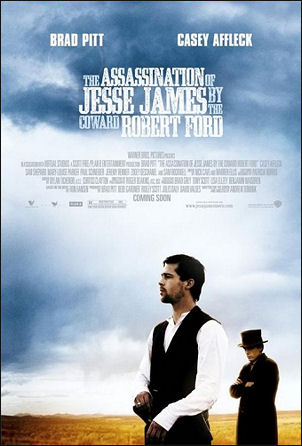 Poland says he feels “bad” for everyone involved including Brad Pitt for having “[worked] his ass off to create an elusive but distinct character.” And yet Pitt truly succeeds — his Jesse James is probably his best performance ever. Empathy is misplaced and unnecessary. Graciously, Poland allows that the supporting cast is “excellent” — true. And that Patricia Norris‘s production design is “first class” — check. And that Roger Deakins‘ cinematography is “stunning” because “you will likely never see light coming from the inside of every character in a movie’s eyeballs like this again.” All true, and let it go at that.

Poland also correctly understands that Warner Bros. reported attempt to cut this 160 minute film down to 110 or 120 minutes was doomed from the start because it’s been shot in a way that necessitates the spending of some time — it’s a movie that has sunk itself right into the pace of life in the 1870s, and any attempt to cut into this would ruin its integrity. I felt the 160-minute length in my butt somewhat, but I never once resented the scope and ambition of this film, and would never in a million years call it an “abusive…self-indulgent mess.”

The Assassination of Jesse James is a curiously sad and haunting slow-train ride that definitely goes to a place that feels whole and complete and resolved. In a way it’s like a theme-park movie, albeit one of the most historically precise and devoted ever made. It isn’t a faux ’70s art film but the real thing, released some 25 or 30 years after the that wondrously fertile decade began to wind down and a bringer of much-needed deliverance. I can’t wait to see it again.