I saw Sean Penn‘s Into The Wild at a special early screening on the Paramount lot several weeks ago, and came away impressed and stirred up. This is an essential “trip” movie — you can’t be any kind of film lover and wait for the DVD — as well as an experience that’s certain to provoke primal passions and arguments. And in terms of focus, passion and visual splendor, it’s easily Sean Penn‘s best-directed film — evidence of serious artistic growth on his part. 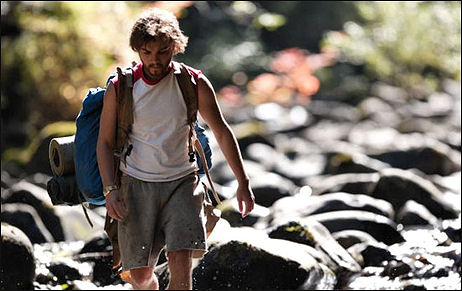 It also contains the best performance Emile Hirsch (Alpha Dog, The Girl Next Door) has ever given, even though, truth be told, he’s not the most charismatic of actors. There’s something vaguely feral and muskratty (and even, at times, other-planet-y) about Hirsch. And yet this quality works for Wild and Hirsch’s strange, quiet performance as a misanthropic loner, especially as he seems to uncover every last shade and mood of misanthropic loner-ism there is.

Everyone presumably knows that Penn’s film is the story of Chris McCandless, the idealistic/disaffected son of privelege who died of starvation in 1992 while trying to be Jeremiah Johnson in the Alaskan wilderness, and that it’s based upon a respected and popular book by Jon Krakauer that covered McCandless’s life and death.

The fact that Into The Wild is a very fully felt spiritual journey stems from Penn obviously being a major believer in the McCandless legend. It’s also a wide-open atmosphere movie about the wonders of nature’s grand cathedral, and this seems especially welcome in this day and age when 99% of the population lives inside artificial environments.

But when you boil the spiritual and visual snow out of it, Wild is about a very self-absorbed, somewhat arrogant, not-exactly-genius-level guy who could have found his way out of the Alaskan wilderness area he died in if he’d thought to buy a decent map. I read an opinion piece by an Alaska forest ranger that clarified my suspicions. 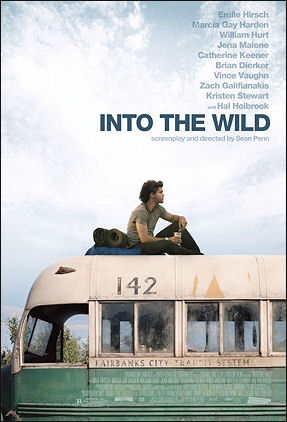 McCandless’s dream — to live a primal life free of meaningless, spirit-draining crap — is something we can all relate to or at least understand, but I’m not sure that Penn’s mostly sympathetic portrait of McCandless (although Into The Wild doesn’t shove anything down yoru throat — it lets you come to your own conclusions) is the entire truth of the matter. I don’t think McCandless took nature quite seriously enough (if he hadn’t found that abandoned school bus he probably would have been dead a lot sooner), and that he wound up paying the price.

I respect that Penn has made a longish film — it’s something like 2 hours and 25 minutes — and that he gives it a kind of drifting, wandering feeling, like you’re wandering through the Louvre only more so. This was the right way to go for a film with this subject and story. And the ending definitely works — you can actually feel a sense of release in the death of a twenty-something guy, which is quite a feat when you think about it. And I agree with everyone else about Hal Holbrook giving an award-quality performance as a kindly old guy whom McCandless/Hirsch meets toward the end of the film.

I’ve other questions and comments, but I have to jam. To be continued….