Brian DePalma‘s Redacted pretends to be a video verite account of some horrid homicidal behavior on the part of some U.S. troops (based on an actual incident) with a third-act stab at depicting the moral penalty for such deeds. I saw it as a sloppy film about a group of badly directed actors playing soldiers, and the rank agony of being surrounded by pretension gone wrong. I’ve never seen a worst-acted film by a major-league director in my life. DePalma has no ear — no ear whatsoever — and those who see Redacted will suffer because of this. 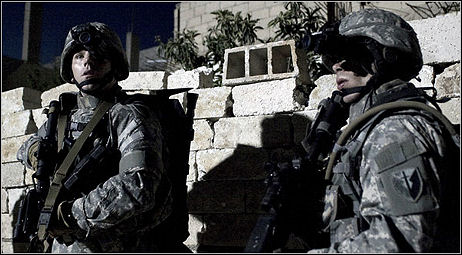 It’s basically about a grunt who sees himself as a future director (Izzy Diaz) incessantly taping his deeply irritating buddies talking about their pathetic lives and viewpoints, and basically watching these guys (a couple of whom are disgustingly overweight) be gross, common and deeply uninteresting. On top of DePalma making us listen to loop after loop after loop of George Friderich Handel‘s Sarabande (this music is owned by Stanley Kubrick‘s Barry Lyndon — what was DePalma thinking?).

And then the rape-murder atrocity happens, and then one of the grunts (Rob Devaney) goes through a post-traumatic meltdown when he’s asked about his Iraq War heroism by some friends back in the states.

I’m in full agreement with David Denby‘s comment, which is that Redacted is “hell to sit through.” It’s the atrocious acting (accidental or deliberate) that gives it this quality. It made me do the usual thing I do when I’m trying to get through a rough sit — leaning forward, tapping left foot, hands over face, quiet groans, singing favorite songs to myself, etc.