Enchanted is a huge hit with the public (a five-day gross in the mid-$50 million range) and critics alike (a 93% positive Rotten Tomatoes score), and even hard-core sourpusses need to admit it has four or five scenes that succeed beautifully. But fans are turning a blind eye to an inescapable fact. The concept (four Snow White-ish cartoon characters catapulted into 2007 New York City) is great but Bill Kelly‘s script is flimsy and hackneyed. Because of this, a film that could have been marvelous barely makes it across the finish line. 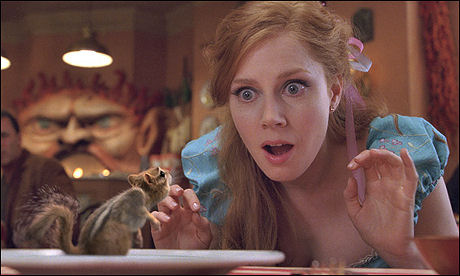 And yet several things in Enchanted do more than work nicely — they’re actually inspired.

Everyone’s delighted with a Disney film getting laughs from a satire of its cartoon- fantasy origins. Amy Adams‘ performance as Giselle is obviously spirited and faux-“adorable” (even though she’s basically giving us her Junebug character amplified with some Carol Burnett-ish skit acting). That said, somebody is going to have to explain to me how Adams’ pure-of-heart, wide-eyed amazement thing works as an Oscar-level performance. It’s a bit — she’s using the same chops in scene after scene.

There are three musical sequences that work superbly — the Central Park song- and-dance number, the apartment-cleaning sequence with the rats, pigeons and cockroaches, and the third-act masked costume-ball dance number. And the true-love kiss at the finale works perfectly — it’s exactly what we want to see happen. And the CG chipmunk (called “Pip,” partly voiced by Lima) has at least one terrific sequence, when he tries to convey the seriousness of a situation through an antic display of charades.

But the lack of internal logic, the poorly thought-out foundations, the nonsen- sical plot turns…my God! I completely bought into the lunatic whimsy of Being John Malkovich (damp muddy tunnel, Garden State Parkway ejection and all), but I felt constantly jabbed and irritated by the same thing in Enchanted. 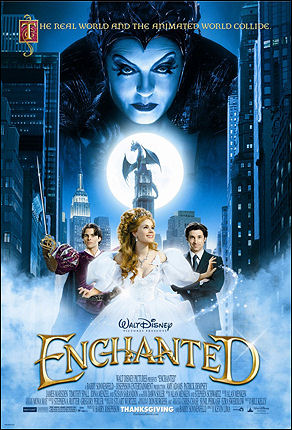 Some filmmakers operate under the impression that making a lightweight fantasy or comedy means no heavy lifting. A fool’s philosophy! A comedy or a fantasy has to be carefully constructed upon a solid foundation and thought through to the last niggling detail as much as any thriller, drama or melodrama. Having fun with a concept and being goofy in the bargain is one thing, but crafting a truly sublime fantasy-comedy is a bitch. And Enchanted is fraught with bits and behaviors that result in one dumb pothole after another.

The key to the Giselle humor is that an impossibly sweet cartoon maiden from a storybook fantasy realm (called Andalusia) is going to be hugely confused and disoriented inside the assaultive reality of modern-day Manhattan. And yet certain terms and conditions would have to apply in both worlds. Cartoon characters drink water, eat food, clean houses, try to kill each other, rescue each other and ride horses, so there’s obviously a degree of overlap.

Cartoon Giselle doesn’t know about adult relationships or iPhones or tampons, but she would certainly know about the basics of protecting herself from a threat. If a huge cartoon boulder was to dislodge itself from a mountain top and start rolling towards the cartoon Giselle, wouldn’t she scamper out of the way to avoid being hit? 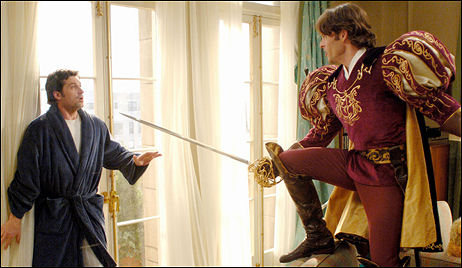 And if it rains in Andalusia, wouldn’t she naturally take cover under a tree or in a nearby cottage? And if she happens to see a large landscape painting in a castle, wouldn’t she have the ability to differentiate the painting from real-life hills and forests outside? And if she’s able to fall 25 or 30 feet from a tree into the arms of a horse-riding prince in a fantasy world, wouldn’t this ability be nullified if she falls 15 or 20 feet from an elevated billboard in the real world?

By the standards of Enchanted, the answer to all these questions is “no.”

When the flesh-and-blood Giselle climbs out of a magical Times Square manhole (a Malkovich-like portal that all the Enchanted characters — James Marsden‘s Prince Edward, Timothy Spall‘s Nathaniel, Susan Sarandon‘s wicked Queen Narissa — magically arrive through) and sees Seventh Avenue traffic speeding towards her, she does nothing — the instinct to avoid pain and save herself from injury doesn’t kick in.

And when a real-life rainfall happens and she begins to get soaked, Giselle just stands there like a turkey. When she sees a huge Manhattan billboard of a painting of a castle, she thinks it’s real and tries to get inside the castle by knocking on the painted moat gate. And when she falls backward off the elevated billboard platform (which is a good 15 or 20 feet high), she lands on top of real-life attorney Patrick Dempsey…and it’s like she’s just fallen off a step-ladder. 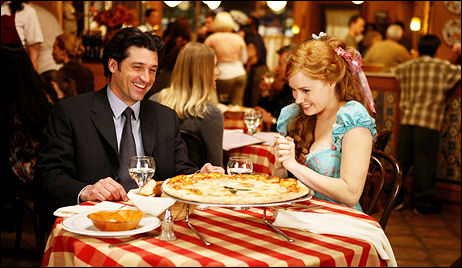 In short, for the first 10 or 15 minutes of her New York visit, Adams’ Giselle isn’t just an innocent — she’s also an idiot.

I understand that Enchanted is not supposed to be The Battle of Algiers. And like I said, some of the fantasy scenes are very buoyant and satisfying. But you really do have to work out a system that allows disparate worlds to reflect each other to some degree and to hang together as a unit. Just ask screenwriter Charlie Kaufman — he conjured a system for Malkovich that worked just fine.

Marsden’s Prince is a friendly boob who leaps atop a New York City MTA bus and then stabs the roof with his sword because…I don’t know. Because he thinks the bus is a threat, obviously. Maybe a kind of dragon. But what kind of dragon carries 25 or 30 perfectly safe, bored-looking people in its belly? I’m lost.

Spall’s Nathaniel arrives in Manhattan to surreptitiously do the bidding of Saran- don’s queen and poison Giselle, but has to contend with chipmunk Pip trying two or three times to alert Edward to his real agenda. But all Nathaniel does to keep Pip from blowing his cover is stuff him in his pocket or inside a glass bowl when the obvious solution would be to throw the little guy into the Hudson River or under a moving subway car — something that might really dispatch him. Attempted murder can be portrayed within the bounds of a light-hearted family flick, but the Enchanted guys were otherwise engaged.

At one point Marsden and Spall walk north out of Manhattan and get themselves a room in some kind of Harlem flophouse. The place is located next to an elevated train track, which has to be the Metro North line that runs out of Grand Central somewhere north of 110th Street. But why do they go to Harlem exactly? Why not the Lower East Side? Why not Williamsburg? 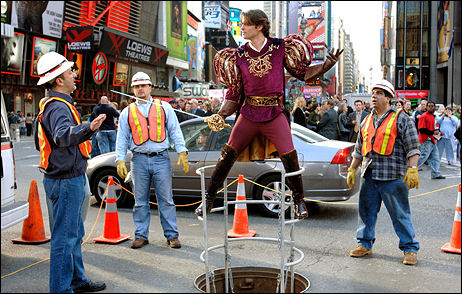 And please don’t mention the CG-dragon-on-top-of-a-building climax — a grotesque left-field addition that couldn’t be more at odds with Enchanted‘s sweet-souled essence, and is also a bald-faced copy of the Ghostbusters finale.

I’m 95% certain this was inserted into the script by producer Barry Sonnenfeld, whose industry rep and influence meant he had much greater power than director Kevin Lima, who comes from feature animation (102 Dalmations, Tarzan) and is basically small fry. Sonnenfeld loves overbearing CG sequences (the Men in Black pix, the finale of Wild Wild West), and the Enchanted finale has his paw prints all over it.

The bottom line is that apart from the animated films created by the genius-level Brad Bird and John Lasseter and a few others, family movies don’t seem to be attracting truly top-tier writers and directors. I don’t know enough players in the G-rated realm to speak with authority, but if Enchanted is any knd of indicator family flicks are largely being written and directed by B- and C-level talents. That doesn’t mean they’re modern-day Ed Wood types, but they’re obviously “not Ivy League.”

Family movies are a different kind of sandbox than regular adult films. Watching one of these godawful things is sometimes like being stuck on Devil’s Island with Steve McQueen and Dustin Hoffman. The trailers for the G- and PG-rated films that were shown before last night’s 7 pm showing of Enchanted at the AMC 14 were an absolute nightmare to sit through. (The worst seemed to be College Road Trip, the new Martin Lawrence comedy.) The flawed Enchanted script tells us that Disney is a supporter of “good enough” over “needs more work.” Welcome, I suppose, to the era of Disney production chief Oren Aviv. 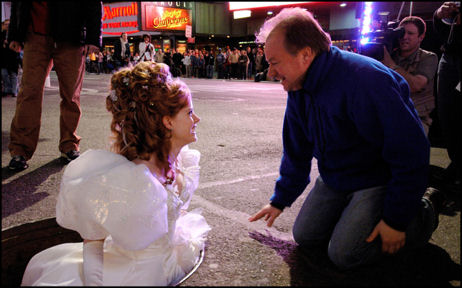