“Once” coming to DVD

“It’s unique but gently lulling. It’s about struggle and want and uncertainty, but with a kind of easy Dublin glide-along attitude that makes it all go down easy. It’s all about spirit, songs and smiles, lots of guitar strumming, a sprinkling of hurt and sadness and disappointment and — this is atypical — no sex, and not even a Claude Lelouch-style kiss-and-hug at the finale. But it works at the end — it feels whole, together, self-levitated.” 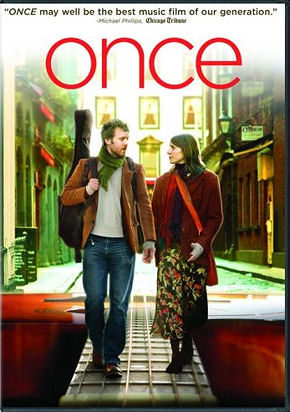 I wrote this 11 months ago about seeing Once at the ’07 Sundance Film Festival, and on Tuesday it’s finally out on DVD. Everyone’s read and heard enough about this amazing little film by now, but this 11.26 review by DVD Talk‘s Preston Jones is a better-written appraisal than anything I’ve read in months.

“Once isn’t a showy Hollywood vehicle, dolled up with lavish sets and opulent costumes; rather, it’s nearly a film from the Cassavetes school, outfitted with an absorbing, fantastic soundtrack — a stark look at the formative stages of an artist’s career and the sacrifices that are necessary in order to take that crucial next step.

“Most astonishingly, you feel none of this weight — Carney keeps the plot flowing smoothly, leaving much of the exposition to his actors’ expressive visages — Once glides along, delivering a bittersweet coda to this tale of unrequited love, one final high-wire trick in a movie that will leave you teary-eyed and breathless at its dexterity. An astonishing, unforgettable masterpiece.”