I’ve gotten into this deballed Charlie Wilson’s War story twice now — on 11.29 and 12.13 — but now N.Y. Times writer Richard Berke has jumped in with what reads like a well-reported story along the same lines. 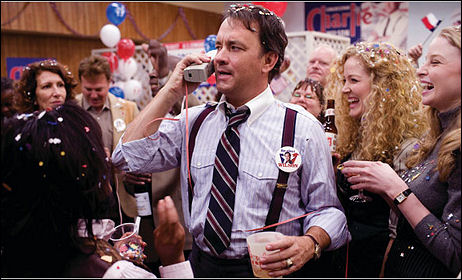 “The Charlie Wilson on the screen is more honorable and less reckless than the real one,” he writes. “Left on the cutting-room floor was a scene of Wilson in a drunk-driving accident. And the movie doesn’t depict some of the book’s wackier moments. There is no mention of Wilson’s dispute with the Pentagon after he sought to bring Annelise (Sweetums) Ilschenko, a former Miss U.S.A.- World, on a Defense Intelligence Agency plane in Pakistan. And though a memorable belly-dancing scene remains, it ignores the part where the dancer brandishes a sword at the Egyptian defense minister, taking aim at his groin.

“Even Wilson, who at 74 underwent hear-transplant surgery in September, emerging from quarantine for the first time to attend the premiere on Monday night in Los Angeles, said, “They were kind to me.”