Oliver Stone‘s World Trade Center is being celebrated by the patriot crowd, conservatives and right-leaning pundits as the best hooray-for-the-USA film in a long time. And they’re correct — it does work on this level, although not in any kind of divisive, anti-liberal way. Like I wrote earlier, I’m fine with it. It didn’t offend my political sensibilities, I mean. I can’t imagine it offending anyone’s. 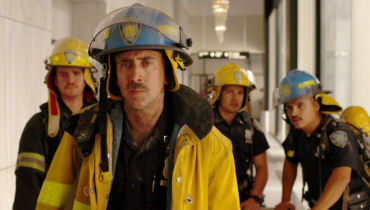 This is why it’s starting to seem likely it’ll be one of the five Best Picture nominees. Because mainstream American moviegoers are always saying Hollywood movies always are a little too caught up in industry lifestyles and liberal attitudes, and here, for a change, is a straight-up emotional film from the heart of the Hollywood beast that any middle-aged Republican farmer from Iowa can go to with his wife and say, “Yeah, my kind of movie.”
This means if it gets Best Picture nominated you know that a lot of the people who profess not to care about the Oscars will probably tune in and root for it. (The last year when the audience jumped as ’99, when Titanic was Best Picture-nominated.) And that means higher ratings and the possibility of higher ad revenues.
It’s good politics to include a “heartland people movie” among the five nominees. That’s why it was a mistake to exclude Walk the Line last year. It deserved to be among the top five anyway, but nominating it for political reasons would have made sense. I realize, obviously, the Academy members don’t weight the political implications of their choices for Best Pictures, but still…
Now that I’m thinking about, I’m wondering why Paramount isn’t sneaking World Trade Center this weekend? Like I wrote yesterday, it’s going to do about $25 million give or take, but it would probably make more than $30 million and the word would go out faster with a nationwide sneak.