“To me, Roy Scheider‘s passing has far greater reverberations than the untimely demise of Heath Ledger,” New York Press critic Eric Kohn wrote this morning. “It signals the loss of a major artist whose fully developed body of work remains wholly distinct from the formulaic trajectory of so many leading men. 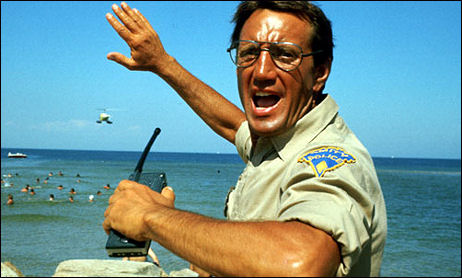 “He was refreshingly believable as the hardened police chief vainly attempting to guard an unsuspecting town from the monstrous creature lurking off shore in Steven Spielberg‘s 1975 classic. And yet Hollywood formula didn√É¬¢√¢‚Äö¬¨√¢‚Äû¬¢t sit that well with him: You could find him as a pimp in Klute and Gene Hackman√É¬¢√¢‚Äö¬¨√¢‚Äû¬¢s withdrawn sidekick in The French Connection, but never a one-man army or incredulous hustler.
“The Jaws sequel was his sole miscalculation, but he followed it up with All That Jazz, Bob Fosse√É¬¢√¢‚Äö¬¨√¢‚Äû¬¢s surrealist musical that remains potent to this day. The vibrant movie concludes with the show-stopping ‘Bye Bye Life,’ where Scheider√É¬¢√¢‚Äö¬¨√¢‚Äû¬¢s Fosse-like character bodes farewell to a troubled existence with a mixture of excitement and melancholia. It could be played at the actor√É¬¢√¢‚Äö¬¨√¢‚Äû¬¢s funeral.”
The Jaws sequel wasn’t Scheiders’ “sole miscalculation” but screw it…let it go.