DVD Talk’s Randy Miller implied it, Defamer‘s Stu VanAirsdale said it bluntly and I’m seconding the motion — director Paul Thomas Anderson needs to come out of his effete rabbit hole and deliver a much more fan-friendly DVD of There Will Be Blood. Because the one that came out last Tuesday is niggardly and flat-out disdainful of the faithful.

In his 4.8 review of the two-disc TWBB release, Miller wrote that Anderson “has gone on record stating that he no longer records audio commentaries, [which is] especially disappointing after the terrific tracks included with Boogie Nights and the like. With no direct participation from the cast and crew, these extras can’t help but feel a bit detached.”
In a rant piece that went up yesterday afternoon, VanAirsdale didn’t pussyfoot around.
“If you’re going to charge us for two discs, you’d better make the second one worth our dime,” he said in an open letter to Anderson. “Which gets us to this new two-disc ‘collector’s edition’ of There Will Be Blood, which Paramount Vantage released April 8th. Pardon us, but what the fuck is this?
“We’re sitting here with our favorite film of 2007, looking for your commentary. Nothing. We bust out the second disc. Photo clippings from your research? Three deleted scenes — only one of which features, you know, editing? And, finally, an exhumed silent short about the history of oil drilling? Really? $30 for two discs and all we get is a public-domain two-reeler from 1923? 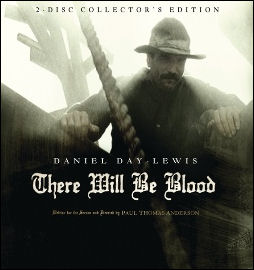 “Look, PTA, we know it’s probably not your fault. There’s probably a commentary sitting on some hard drive in Vantage boss John Lesher‘s office waiting for the precise moment when ‘collectors’ will be ready to part ways with another $30 to hear it. There’s probably behind-the-scenes footage with Scott Rudin arriving on location in Marfa, Texas, overdressed and throwing a BlackBerry at the assistant whose weather forecast turned out 15 degrees cooler than the actual temperature.
“We know there are interviews with you, Day-Lewis, Paul Dano and Ciaran Hinds floating around. We know because it’s you, and we expect great things. Not…this.
“So get with the fucking program already, PTA, and stop jerking us around with the most stingy, shabby, half-assed miscarriage of DVD justice since Mulholland Drive.”