A pair of conservative bloggers are freaking over a just-out Newsweek cover photo of Rep. Michelle Bachmann, claiming in effect that Tina Brown‘s publication is doing to the radical-right Congressperson what Life magazine did to Charles Manson in 1969. Except Bachmann does project what Chris Matthews once described as a “moronic stare” — ditzoid, glassy-eyed. It’s not Photoshop. That’s how she looks. 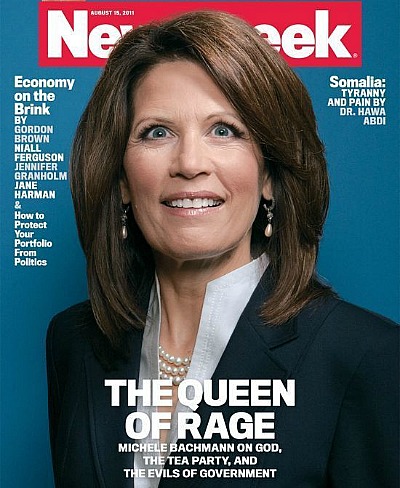 An appalled Noel Sheppard of newsbusters.org wrote, “Exactly what were the editors thinking putting this kind of a picture of a sitting Congresswoman and presidential candidate on their cover?”

An unidentified editor at Freedom’s Lighthouse has asked, “Can anyone really say with a straight face that the mainstream media is not totally biased against conservatives?”

I’m presuming that other conversatives will chime in on this issue today. I’d like a friend-of-Bachmann to make a case that her eyes don’t have that dopey-alien-from Trafalmadore expression all on their own, without Tina Brown’s help. Because they clearly do.