HE is now aware of two excellent films about the ’04 Presidential election in Ohio — a feature documentary I’ve already written about and a short documentary I just saw today. And boy, do they wise you up and make it clear what an incomplete, fuzzy-minded job regular TV news reporters did in covering what was really going down. 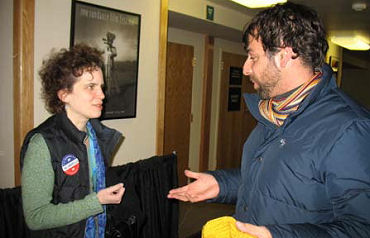 The feature is James D. Stern and Adam Del Deo‘s …So Goes The Nation, which I’ve called “the smartest, the most perceptive and the most fair-minded reading of the election I’ve ever seen or considered.”
The short is Laura Paglin‘s No Umbrella: Election Day in the City, a documentary short (20-something minutes) that shows how a polling place in a black neighborhood in Cleveland was under-served and under-maintained — thus forcing would-be voters who couldn’t afford to wait two or three hours to vote to do just that — by an unresponsive bureacracy.
We all know what really happened, of course. Ohio’s Secretary of State Kenneth Blackwell happened. A postscript at the end of Paglin’s film says that “a Congressional report found ‘massive and unprecedented voter irregularities and anomalies through the state of Ohio’ caused by ‘intentional misconduct and illegal behavior, much of it involving Blackwell, the co-chair of the Bush-Cheney campaign in Ohio. One result was “a wide discrepancy between the availability of voting machines in more minority and Democratic and urban areas as compared to more Republican, suburban and exurban areas.”
Nation has an embrassment of brilliant talking heads al through it — Republican National Committee chairman Edward Gillespie, his Democratic counterpart Terry McAuliffe, Bush campaign manager Ken Mehlman, Kerry campaign manager Mary Beth Cahill, senior Democratic adviser Paul Begala, local Democratic strategist Evan Hutchison, et. al.
Umbrella delivers several memorable personalities also, but the unquestionable star is Fannie Lewis, a plucky, spirited councilwoman from Cleveland’s 7th Ward who tries to deal with shortages of polling booths, voting machine inserts that take forever to arrive, anger among voters waiting in line and whatnot. She’s a real trip.

Los Angeles residents will have a chance to see both films in fairly quick succession if they care to: …So Goes The Nation will open on Friday, 10.20 at the Regent Showcase on La Brea just south of Melrose, and No Umbrella will show at the Pacific Palisades theatre on Sunday, 10.29 at 8:15 pm, as part of the Pacific Palisades Film Festival.
I spoke to Stern and Del Deo earlier this afternoon. I didn’t realize until today that their film’s website uses that very same HE quote I mentioned earlier in the piece. I told them I had decided sometime during the early part of the Kerry campaign that Bob Shrum and Tad Devine were definitely two of the bad guys who mis-advised Kerry on just about every key issue. One said, “I don’t know if Shrum was literally the bad guy” but neither argued with the basic thesis.
We talked about the inevitability of Barack Obama and why, in my view, Hilary Clinton, if she gets the presidential nomination, will lose big-time. This will happen because the working-class bubbas hate her guts, and if you don’t get the bubbas on your side you’re dead. Stern reminded me that “political landscapes change rather suddenly at times,” and told me that after the ’04 election a major news organization took a post-Presidental election poll in Ohio and that Kerry beat Bush 57 to 43.
They said they didn’t know when …So Goes The Nation will be out on DVD, but said their film has been qualified to compete for a potential Best Feature Documentary Oscar nomination.