There’s this dark comedy called Spring Break in Bosnia now being filmed in Bosnia and Herzegovina, and it’s about an actual attempt once made by journalists to find and capture real-life Serbian war criminal and former head of state Radovan Karadzic. In the script he gets nabbed, but in real life he’s still free. And Senad Pecanin, the editor of a weekly Muslim-read magazine called Dani, is telling New York Times reporter Nicholas Wood that “it’s kind of farcical to have this when Karadzic is still at large. For me it’s a Hollywood invasion of tragic reality.” 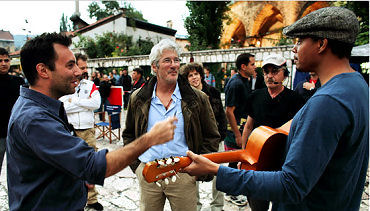 And yet the filmmakers — director Richard Shepard (The Matador) and actors Richard Gere, Terrence Howard, Diane Kruger and Jesse Eisenberg (The Squid and the Whale), among others — are saying “they hope the movie, due out next year, will shame the international community into making Karadzic’s arrest a higher priority [than it has been before], so that he will finally go on trial at the International Criminal Tribunal for the Former Yugoslavia in The Hague on charges of genocide and crimes against humanity.”
Karadzic is thought to be responsible for a significant portion of war-crimes killings that happened during the ethnic Serb-Bosnian war of ’92 to ’95, during which roughly 100,000 people, most of them Bosnian Muslims, are estimated to have been killed. His policies in office led to the expulsion of all non-Serbs from half of Bosnia, and to the three-year siege of Sarajevo, in which up to 10,000 people bought it. United Nations prosecutors have also accused Karadzic of planning the massacre of nearly 8,000 Muslim men and boys at Srebrenica in 1995.