Yesterday I intended to discuss Sharon Waxman12.4 piece contending that Mel Gibson‘s Apocalypto has created some confusion and tension among Academy and DGA voters who had wanted to just ignore Gibson’s film due to his anti-Semitic outburst last summer, but are now torn about this due to the film’s alleged excellence, which they may feel obliged to honor with a nomination or two. I tried to get into it but I so radically disagreed with what she’d written that I felt tongue-tied on some level. 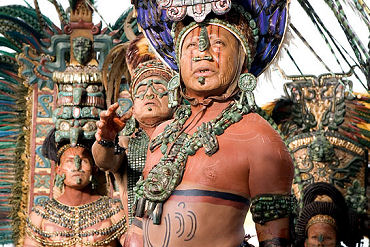 As I explained in last Friday’s review, Apocalypto very well made but there are far too many slit throats, chest-cavity guttings and bouncing severed heads for anyone to take it seriously as any kind of awards contender. (I’m sorry, but a\ny scene about the chewing of recently-killed tapir testicles has to be considered one too many in that vein.)
The bottom line is that the only DGA and Academy members who may feel torn about whether or not to nominate Gibson for Best Director or Apocalypto for Best Picture are people, in short, who either (a) have no taste, or (b) share Gibson’s diseased obsession with the clubbing, throat-slicing, head-severing, disembowelling and general torturing of human beings as a subject deserving prolonged meditation.