Until Monday night’s Republican presidential contenders debate, I hadn’t quite realized how tiny Rep. Michelle Bachmann is. Notice how shrimp-like she seems compared to the other guys (i.e., much shorter than Ron Paul, who’s about 5’9″), even in heels. She appears to be 4′ 11″, which is right next to dwarf territory. And nothing I’d heard or read about her previously even mentioned the height factor…odd. 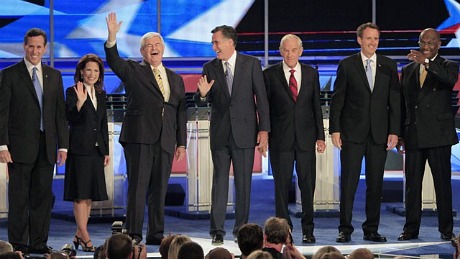 I remain convinced that one of the many reasons Michael Dukakis lost to George Bush, Sr. in ’88 is that a certain percentage of voters felt he was just too short to be President. (He looked like Rocky the squirrel in that catastrophic tank footage.) Modest-sized candidates like John McCain (around 5’8″) will never take any height flack, and I would imagine even a candidate standing 5’3″ or 5’4″ would be semi-acceptable to most voters. But to be less than five feet tall strikes a symbolically inappropriate note on some level.