Projectionlist Is The New, Much Better Coming Soon 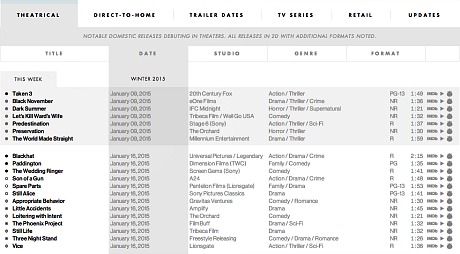 ABOUT THE EDITOR: “As a graduate of Texas A&M University, Ted Smith moved to Los Angeles in 2005, where he has worked to varying degrees in film and commercial production, having also coordinated productions for a number of prominent advertising and fashion photography campaigns. Currently, he is pursuing a career in screenwriting, while also serving as a founding partner of Oil and Cattle, a Los Angeles-based production company with a focus on procuring, developing, and producing literary properties, set to launch in early 2015.

“Since the mid-to-late ‘90s, in the heyday of sites like Ain’t It Cool News and Corona’s Coming Attractions, Ted has religiously followed the world of online movie & TV coverage. During that time, he has become increasingly familiar with its many facets, and has always sought to be part of its consciousness in some small way. While the prolific demands of film critique/journalism lie beyond his purview, as the creator and sole editor of The Projection List, his strengths speak directly to the site’s attributes, and serve to fuel his long-held desire to provide a focused, comprehensive, cinematic release resource.”