I’d been told that Gus Van Sant, Matt Damon and John Krasinki‘s Promised Land (Focus Features, 12.28) was Capra-esque, which means upbeat in a sort of sappy, dipshitty sort of way + emotionally on the nose. I was also told it has a little Local Hero in its bloodstream. Well, it’s not channeling Frank Capra or Bill Forsyth. It plays its own tune, and is, I feel, an entirely decent “message” film (i.e., fracking sucks) that feels nicely balanced and shaded and well acted. It flows along.

Only one thing feels miscalculated. I’m speaking of a third-act surprise that kinda knocks everything off-balance because it feels perversely thrown in because some producer said “you know what? this movie needs a third-act jolt.” But I wouldn’t call it fatal. It’s just one of those “did they really need to do that?” moves.

Promised Land is a liberal-humanist social drama that follows a predictable path. You can tell that from the synopsis and the trailer and the poster. But the writing and the unforced acting styles put me at ease early on and I just went with it. It’s a kind-hearted, well-acted, reasonably intellligent thing — naturally, agreeably paced. In fact, I watched it twice. Okay, not intentionally. If you don’t take the screener out the feature automatically plays again so I just sat there and submitted.

At the outset Damon is a nice guy with an Iowa farm background who’s all suited up and smiley and working for an evil natural gas company called Global Crosspower Solutions. He arrives in a small Pennsylvania town to sell a drilling project to the locals and pass a lot of money around. And the usual questions about the chemicals used in fracking (i.e., high pressure drilling for gas) and the water table being poisoned and cows dying and all that. But enough of the locals want those fat Global checks.

And then an environmentalist (Krasinki) comes along and starts letting people know the facts. And Damon starts getting pissy and resentful (he hasn’t been trained by Global about how to deal with green types?) and feeling a little bit guilty besides, and then a lot guiltier. And you know where it’s all heading.

Damon and Krasinki handle their lead roles nicely. Also believable and planted are Hal Holbrook‘s jowly, fair-minded guy and an anti-fracking advocate, Rosemarie DeWitt‘s local teacher with eyes for Damon, and the always impressive Scoot McNairy as a resentful farmer. It’s too bad that Frances McDormand‘s natural gas rep (an ally of Damon’s Steve Butler) isn’t developed sufficiently and winds up seeming arid and floundering at the end, but I shrugged this off.

One of my favorite bits is when Krasinki delivers a Sesame Street-level demonstration of what fracking is to a classroom filled with 10 year-olds. It’s highly amusing because the idea is to reach the (probably) uniformed audience — we’re the ten-year-olds! Hah!

Promised Land probably isn’t going to be nominated for anything, but there’s no shame in just being a decent, good enough small-town drama. I didn’t feel burned or fucked with. It’s a smart, pleasant sit. 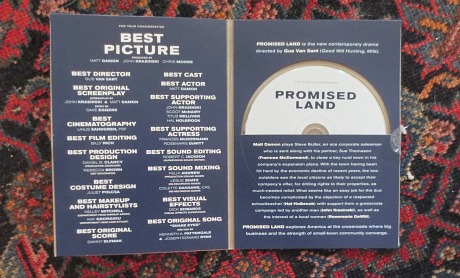