The first line of the second paragraph of Anthony Lane‘s review of Edge of Darkness (in the 2.8 issue of The New Yorker) reads as follows: “Mel Gibson, who looks and sounds not a day over sixty-five, plays a policeman named Thomas Craven.” 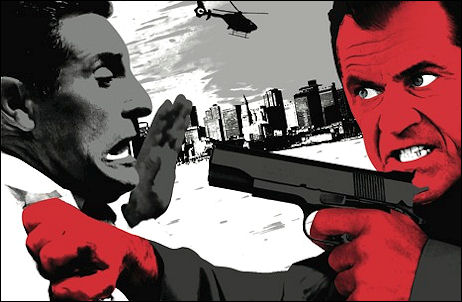 The remainder continues: “The name is a joke, since the movie insists, time and again, that he has all but dispensed with fear. Warned by a fellow-officer that “someone armed and dangerous” is on the loose, Craven replies, ‘What do you think I am?’ This is delivered not with a wink and a wild grin — we are not, thank Heaven, in Lethal Weapon territory — but with a pared-down, dead-eyed plainness, which goes with Craven’s salty hair, thinning at the back, and the frown lines carved across his forehead like rifts in a relief map. He wears a loose-fitting suit that he might have picked up at a morgue.

“‘I’m the guy with nothing to lose who doesn’t give a shit,’ he says. You’re telling me.”