Put In Its Place

“A potentially exceptional story is told in a flatly unexceptional manner in Defiance,” says Variety‘s Todd McCarthy in an 11.10 review. “True-life yarn of a band of Jewish brothers who led a small but resilient resistance movement against the Nazis in Belorussia during World War II seems like such a natural for the bigscreen that it’s surprising it’s never cropped up before.

“But Edward Zwick‘s version of the grim but inspirational events becomes more conventional as it goes, topped by a climax straight out of countless war pics and Westerns.

“Through roughly the first half, viewer goodwill and interest are piqued by the story’s basic circumstances, the promise that at least some of these characters will find a way to prevail, Craig and Schreiber’s rugged appeal, and the muted beauty of Eduardo Serra‘s blue-, green- and gray-infused location cinematography in the forests of Lithuania.

“But through the remaining hour-plus of the script by Clayton Frohman and Zwick, it all becomes pretty standard-issue stuff, filled with noble and tragic heroism, familiar battle images and last-second rescues. 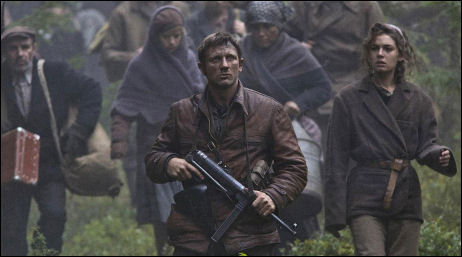 “None of the suffering, sacrifices, anxieties or tests of heart and soul are rendered with any special dimension or heightened force, nor depicted with anything near the staggering, hallucinatory impact of the two great Russian films to have depicted events in wartime Belorussia, Larisa Shepitko‘s 1977 The Ascent and her husband Elem Klimov‘s 1985 Come and See.”

“Zwick has made the debatable decision to have all the actors deliver their dialogue in English with a roughly Slavic-cum-Russian accent, then speak (subtitled) Russian when the occasion demands it. Given the odd disorientation this provokes, one wonders if the accents were worth the trouble.”