Stephen Frears‘ The Queen (Miramax, 9.30) will open the New York Film Festival this Friday (9.29), but it’s also been shown at the Venice Film Festival. It would have been okay to write about it after that festival debut, but I’ve been holding back. I’ve decided to let go today because a guy called me a candy-ass the other night for doing so. 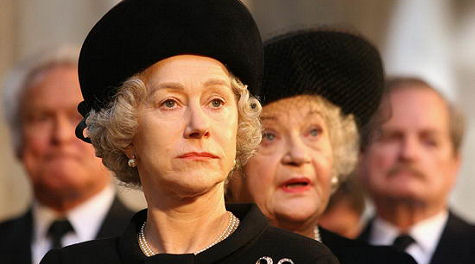 I don’t want to put The Queen down — it’s intelligent and restrained, and Helen Mirren gives us a fascinating Queen Elizabeth II — but there’s not a whole lot to it, really. It’s a tidy, occasionally intriguing drama about the push-and-tug between the Queen and Prime Minster Tony Blair (Michael Sheen ) in the wake of the death of Princess Diana in September 1997.
And all we’re left with at the finale is what we knew going in — that the Royals, seen by the British press as cold and unfeeling about the Diana tragedy, were reluctantly obliged to make a show of sharing in the nationwide grief. The movie simply shows us the day-by-day, inch-by-inch process by which this happened.
< ?php include ('/home/hollyw9/public_html/wired'); ?>
After days of frosty disdain and indifference behind the gates of Buckingham Palace and Windsor Castle, and yet with Blair delicately but persistently trying to awake the Royals and, as he allegedly expressed it himself, “save these people from themselves”, the emotional urgency of the situation gradually penetrated, and Queen Elizabeth responded with a couple of photo ops and a well-written but somewhat curt TV address.
I was unable to detect any current in this film that lifts it above the realm of a muted inside-the-palace parlor piece. Jolting, searing cinema it’s not. It feels a bit too much like its subject, almost as if the film was co-directed by Queen Elizabeth herself, and it feels a bit too miserly with historical details. And yet it unfolds in a tight, well-ordered, agreeably perfunctory way.
It modestly satisfies, in other words. I didn’t feel burned, just under-nourished, and I’ll be surprised if very many people come out of it with any major beefs. 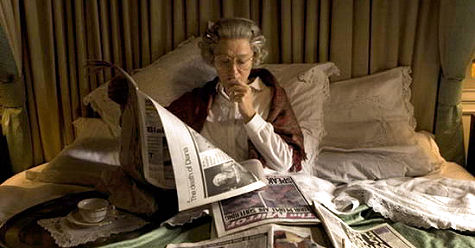 Mirren seems to “get” Queen Elizabeth in a mildly intimate, as-deep-as-it-goes way. She’s very skilled at conveying that overly hemmed-in, elite-British mindset. But you’re still left with an impression at the end that this woman and her husband, Prince Phillip (James Cromwell) and the Queen Mother (Sylvia Sydney ) are very odd ducks — chilly elitist relics, totally cut off from the hurly burly, existing (“living” seems too intense and palpable a term) in a membrane of protocol.
The Windsor-Mountbattens are as close to the embodiment of “bloodless” as anyone could possibly imagine. By the standards most of us live by today, by the notion that you have to open up and give a little and show a little heart in life’s affairs, they’re all but mummified.
The Queen is not, to me, as satisfying in a passionate, striking and emotionally pronounced way as Mirren’s other Queen Elizabeth performance in that HBO film with Jeremy Irons (which she won an Emmy for). Her performance for Frears is necessarily restrained, dry and reserved, as befits the subject. Which makes for a bit of a problem.
Mirren’s Queen Elizabeth obviously isn’t the gusto type — everyone will get this, of course — but that still leaves us with a character who’s at once interesting and yet a kind of walking mannequin.
The story I would have liked to see would have had a little “live Diana” — maybe some flashbacks with an actress portraying her (Diana never appears in the film, and is only verbally referred to), with a fuller, tastier reenactment of her final night on the earth with Dodi al Fayed — and with sharper exchanges between the Queen and her son about the whole messy thing with Diana and Camilla Parker Bowles, and more telling details about the curiousness and remoteness of the life of the Windsor-Mountbattens. 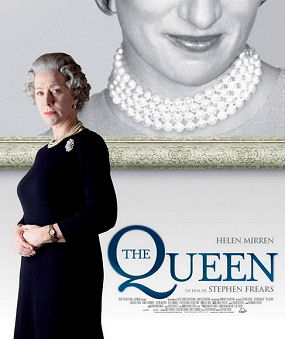 Just as these people are museum pieces, so is the film to some extent. The fact is that it doesn’t have a lot of “English” — no real visual pizazz or seasoning. With such a bloodless lead character and such an understated story, you’d think Frears would have used some high style to compensate.
I would have preferred more of an exploration of the emotional unruliness and the deterioration of courtly dignity that Diana brought to the Buckingham Palace soap opera. And the appalling lack of good judgment in hooking up with a scumbag like Dodi Al Fayed.
The film reminds us that Queen Elizabeth harbored negative feelings towards Diana, and thought that she had done immense damage to the monarchy. I think she was more correct than incorrect, I feel, in her disdain for Diana’s lack of taste and judgment. And yet the film doesn’t fill us in at all about what happened with Diana, or why — no dirt. It is assumed that we’re fully up to snuff on her romantic dalliances and can render our own judgments. I think that’s a bit of a cop-out.
(I was asked to write a long file about Dodi al Fayed when I was working at People in ’97. After making calls and taking notes for three or four hours, I knew he was basically trash — a spoiled son of a rich man, a guy who didn’t pay his gardener bills. And yet Diana chose him to be her boyfriend. That told me a lot about her, sad to say. The truth is that she was not an especially bright woman.) 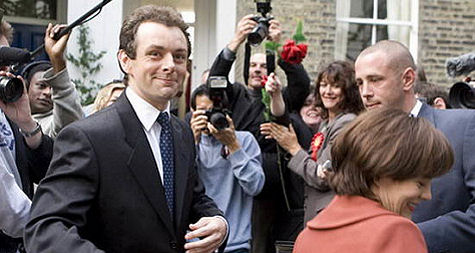 Frears seems to have shot what was on the page, it seems, and worked on getting the performances right, but he didn’t seem to have the budget or the time to be expressionistic in an angular, big-screen sense. The Queen feels television-y. This isn’t The Hit, Bloody Kids, The Grifters or High Fidelity. It’s not even up to the level of Mrs. Henderson Presents. It’s more in the realm of Prick Up Your Ears or The Snapper, that British-Irish TV film he did about the young girl having a baby.
Frears is a seasoned pro, but at what point does the fine art of shorthand, less-is- more storytelling — the notion that it’s always better to show a bit less than what viewers might want to see — become dramatically stultifying? The Queen skirts the edge of this.
The most emotionally moving moment is when a big antlered stag stops and peers at Queen Elizabeth as she’s waiting to be picked up after her jeep stalls in the middle of a river in Scotland. It’s the only time she really lets it out during the whole film. I felt much more from the Queen’s relationship with this animal than in her relationship with Blair or her son or her husband or her aide or her mother. Really.
Underneath the story of Blair managing to goad Queen Elizabeth into showing a bit of her emotional self (or at least pretending to do that), The Queen seems like a quietly persuasive argument for the abolishment of the Royals, which is why, I’m guessing, it’s struck some chords with the British. But I wonder how average Americans will respond, or if they’ll respond at all. 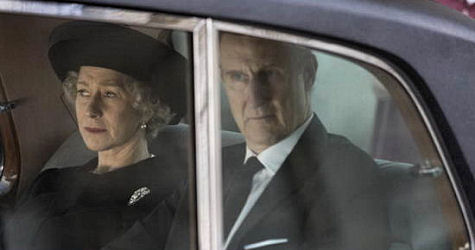 The question is, what is it that we, the audience, derive from learning that once, and only once, a famous woman of state who seems to be the most emotionally remote and rigidly-mannered public figure on the face of the globe let down her guard a wee bit and showed a bit of humanity and softened her rectitude… but only after days and days of people and newspaper headlines saying, “What is wrong with this woman? Where is her heart?”
Keeping it all inside with a stiff upper lip is not a recipe for emotional health. Most of us know that…except for Queen Elizabeth, it seems. Maybe she’s learned at the end of this drama that it’s better to let the heart show a bit more…fine. Good for her if she came to this place. But I wasn’t entirely sure at the end of the film that she had.
In her final scene with Blair, she seems to be mostly shaking her head a bit quizzically and saying “I don’t know what happened, frankly.” It confused her, threw her off balance. What, then, does Queen Elizabeth’s momentary softening have to do with the price of rice in our own lives? Not very much, if you ask me.
Incidentally: Frears uses some footage to suggest a brief coverage of the Paris car accident that took the life of Princess Diana and Dodi al Fayed, but no one “plays” these two. (Not in the print I saw, at least.) And yet below is a photo of Frears directing a couple sitting in the back seat on a black car — a couple that looks very much like Diana and Dodi — the blonde hairdo looks exactly like hers, and the guy seems to be of Middle Eastern descent. It suggests that Diana and Dodi were in fact cast, portrayed and filmed, and then Frears cut the footage. 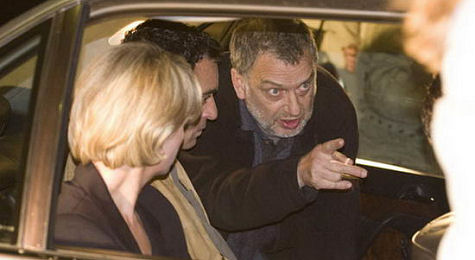