I’ve never seen On A Tuesday, a short film about a thirtysomething couple getting married at San Francisco City Hall on a work day. I’m only aware of it because a good friend, Svetlana Cvetko, shot it and a friend of hers (and an acquaintance of mine) named David Scott Smith directed and co-wrote it. But interest has been aroused by an American Cinematographer article (July issue, page 16) about Cvetko’s unusual lensing of it. 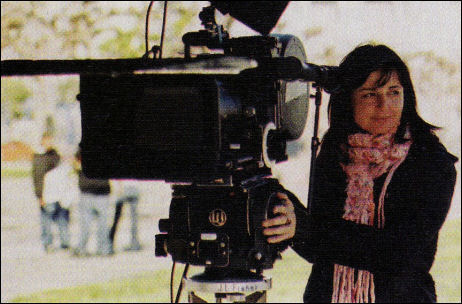 On A Tuesday dp Svetlana Cvetko

The gist is that Svetlana decided to shoot this intimate little piece in the widest aspect ratio I’ve ever heard of — 3.18 to 1. The widest moving image I’ve ever seen is the 2.76 to 1 aspect ratio of Camera 65 or Ultra Panavision 70, which you can see on the Ben-Hur or Mutiny on the Bounty DVDs. I suppose I just love the perversity of an ultra-widescreen composition being used for a “small” film, or a format not necessarily mandated by the subject matter. Svetlana’s reasons were her own, of course, but that’s what makes a ballgame.

It’s a shame On A Tuesday isn’t viewable online. I’d love to see it for this aspect alone. Here’s a site with some nice frame captures.

Of course, I don’t know how a film this wide could projected on a screen in the right fashion. The screen would have to be fairly large and, I would think, slightly curved to deliver the right composition.

I just love the idea of making a quiet, soft-spoken subject seem exceptional by using some kind of vivid technique. I would have loved it, for example, if David Jones‘ Betrayal (’83), a 100% pure-dialogue movie based on a highly admired Harold Pinter play, had been shot in the 60 -frame-per-second Showscan format. Unnecessary, of course, but it would’ve been amazing. 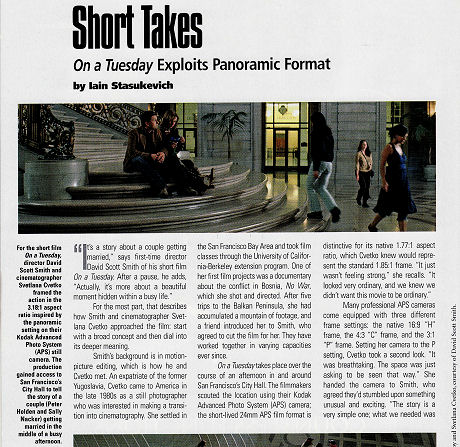