Richard Glatzer and Wash Westmoreland‘s Quinceanera (Sony Pictures Classics) is a nice little cultural mixer (gays and Hispanics in L.A.’s Echo Lake district) and an above-average indie drama. The story moves along, nothing feels arch or forced, and all but one of the characters are likable. The one who isn’t — the problem — is Emily Rios, who plays the central character of Magdelena, whose pregnancy gets her kicked out of her home and leads to her staying with an 80-something uncle (Chalo Gonzalez) along her gay cousin Carlos (Jesse Garcia), etc. The glitch is that Rios plays her character like a sourpuss all through — irritated, frowning, scowling — and spending time with her is a drag. It’s not Rios herself — she’s lively enough off-screen — but Glatzer and Westmoreland’s decision to cover Magdelena in downer molasses. 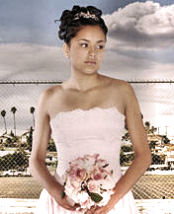 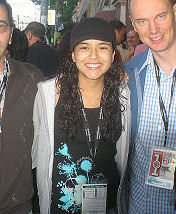