Walter Salles‘ On The Road is masterful and rich and lusty, meditative and sensual and adventurous and lamenting all at once. It has Bernardo Bertolucci‘s “nostalgia for the present” except the present is 1949 to 1951 — it feels completely alive in that time. No hazy gauze, no bop nostalgia. Beautifully shot and cut, excitingly performed and deeply felt.

It’s much, much better than I thought it would be given the long shoot and…I forget how long it’s been in post but it feels like ages. It’s so full of life and serene and mirthful in so many different ways. I was stirred and delighted and never less than fully engrossed as I watched it, and it’s great to finally run into a film that really hits it, and then hits it again and again. This is a big surprise. I don’t care what the Guy Lodge gang is saying — it’s certainly a major contender for the Palme d’Or.

On The Road, yes, is episodic and roaming…how could it not be? The book is the book is the book. But like Salles’ The Motorcycle Diaries, it works. The choices, the moods, the shaping, the recapturing of an America and a world that no longer exists. Every shot and every cut is so precise and dead to rights.

I’m in the press conference room right now, tapping this out in my seat in the front row with Walter Salles, Garett Hedlund, Kristen Stewart, Sam Riley, Kirsten Dunst, Viggo Mortensen and others due to arrive in about ten minutes so this review can’t last, and there’s Holy Motors at noon so I can’t even stay for much of the q & a. But at least I’ve tapped out a decent first paragraph. I have to stand up now and get my place with all the photographers milling around…later. 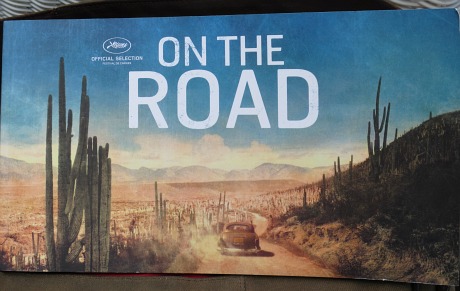