Hobbit director Peter Jackson has told Geoff Bouncher, of the LA Times‘ Hero Complex, that during the Warner Bros. ComicCon presentation on Saturday (2 to 5:30 pm) inside Hall H, that he won’t be showing the footage in 48 frames per second 3D, which is how it was shown at Cinemacon last April. 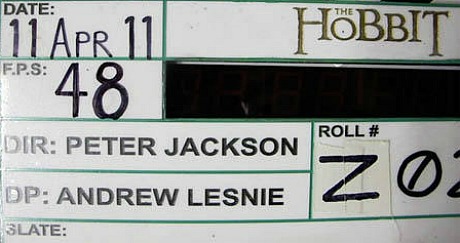 This is quite a shock to the system. It strikes me as cowardly, if you want to know. I’m really astonished that Jackson, a man of conviction, is admitting that he and Warner Bros, marketing executives are afraid that reactions among Comic-Con-ers will be as negative as they were in Las Vegas. No balls, boys and girls!

“I think it’s more about protecting the downside,” Jackson told Boucher, “rather than helping the film in any significant way. There is a huge audience waiting to see The Hobbit, and any positive press from Comic-Con will truthfully have little impact on that.

“However, as we saw at CinemaCon earlier this year, with our 48 frames per second presentation, negative bloggers are the ones the mainstream press runs with and quotes from. I decided to screen the Hobbit reel at Comic-Con in 2-D and 24 frames per second, so the focus stays firmly with the content and not the technical stuff. If people want 3-D and 48fps, that choice will be there for them in December.”

I’m sorry but there are names for this kind of thinking and this kind of behavior, and those names are candy-assed and turn-tail. I’m one of those who worshipped the 48 fps footage I saw last April, and I’m really crushed to hear this. Jackson bravely decided to advance the state of cinema with 48 fps, and now he and Warner Bros. marketing execs are cowering like scared rabbits.

I was going to drive down to ComicCon to gauge the reaction to the 48 fps screening but I guess I won’t be going now.

“The state of cinema as most of us know it changed radically when 10 minutes of footage from The Hobbit were shown on the huge screen inside Caesar’s Palace,” I wrote on 4.24.

“48 fps 3D is such a startling and game-changing thing that it’s like the introduction of sound in 1927, CinemaScope in 1953, and high-end 3D with Avatar. I was knocked back in my seat…open-mouthed. This is the most startlingly ‘real’ form of cinema I’ve ever seen, so much so that it isn’t ‘cinema. And there’s the rub.

“It’s like watching super high-def video, or without that filtered, painterly, brushstroke-y, looking-through-a-window feeling that feature films have delivered since forever. On one level what I saw this morning was fucking fantastic, and on another it removed the artistic scrim or membrane that separates the audience from the performers. Which gave a little feeling of “hmmm.”

“The effect is that you’re not really watching a ‘film.’ You’re watching, it seems, high-def video footage that, in an earlier time, might have been shot simultaneously along with the traditionally captured, more cinematic version that would be shown in theatres…or so you would have told yourself as you watched it in 1998 or 2005 or whenever. Except this is now and the high-def, 48 fps footage we saw this morning is it — this is how the movie will actually look.

“Forget the windowpane. You’re right there and it’s breathtaking — no strobing, no flickering, pure fluidity and much more density of information. This makes the action scenes seem more realistic because it looks too real to be tricked up, and the CG stuff looks astonishing for the same reason.

“I believe that henceforth 48 fps will not just become the norm but we’re going to hear calls for up-rezzing classic 24 fps films to 48 fps. Douglas Trumbull has allegedly done such conversions, and I for one would be highly in favor if they caught on. And yet 48 fps kills that classic filtered, strobing effect that we’ve known all our lives. It’s a shocker, all right, and I’m not sure if the industry as a whole is going to be on my side of this.”