Six weeks ago I complained about Criterion’s choice of a jacket cover for the forthcoming Downhill Racer DVD (due 11.17). I said I preferred the original 1969 movie poster — a bedroom metaphor for the glamour of Olympic-level skiing — to designer Eric Skillman‘s concept of a droid skiier (Robocop negotiating a slope on the ice planet of Hoth) that came from a Downhill frame capture. 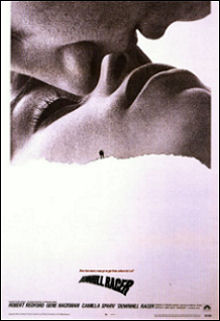 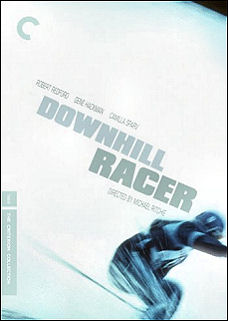 On 10.1 Skillman blogged about the various options he came up with for Criterion and why the robot-droid art was chosen, etc.

“The concept for Downhill Racer came pretty easily,” he wrote. “The film, about an arrogant but talented athlete, has some really dynamic skiing visuals, and a freeze-frame sequence during the opening credits that just begs to be made into a cover.

“There was also this pretty great-looking original poster…but frankly, the film is anything but a love story, and we all felt it was pretty misleading. Better, I thought, to focus on the great skiing cinematography — shot on skis in large part — that’s such a big part of the film.”

Skillman is a first-rate designer and far too perceptive, I’m presuming, to conclude that the original poster was selling “a love story.” It’s selling the sex, money and glamour element that Robert Redford‘s David Chappellet clearly desires — the thing that drives him to be an Olympic-level athlete. He wants to win medals and be famous, yes, but he’s basically a half-educated small-town bumpkin who craves a feeling of social upgrade and opportunity that would come, he feels, from schtupping a classy European hottie like Camilla Sparv. I think it’s clear that Skillman’s use of the term “we all felt” is a diplomatic way of saying that it was mainly his Criterion employers who saw a “love story” impression.

The ’69 poster is obviously aimed above and beyond a mainstream popcorn sensibility. I wrote last August that “this kind of poster would be totally unimaginable by today’s ad-art standards,” and the final Criterion decision on Downhill Racer does seem to bear this out. Movie art posters and DVD jackets generally demand an upfront visual directness that any eight year-old can would not only respond to but feel utterly unchallenged by.