Realm of the Surreal

Here’s an engaging At The Movies segment in which mirrorfilm.org’s Kartina Richardson delivers her Four Faces of Nina explanation of Darren Aronofsky‘s Black Swan, and about how the film is essentially about opposing identities at war. 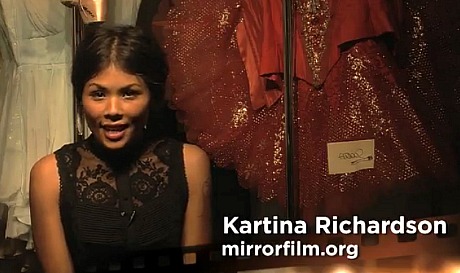 The four psychological components of Natalie Portman‘s ballet dancer, Richardson explains, are the imp, the baby, the housekeeper and the center. But the main-event battle is between the imp, the nihilist spreader of chaos, and the fretting housekeeper. The center laments as the imp “sabotages,” the baby wails and the housekeeper “cleans up the mess.” Meanwhile “the bathroom is Nina’s only escape from public scrutiny,” Richardson notes.

The At The Movies video is also worth watching if you haven’t caught co-host Iggy Vishnevetsky, the brilliant Russian wunderkind critic, in action. He has a smooth voice and manner, but has been instructed to read copy and behave exactly like all movie talk co-hosts have read and behaved since the beginning of time, and so he comes off as having been constrained and almost half-neutered.

When Iggy informs co-host Christy Lemire that he doesn’t agree with her praise of Black Swan, you can feel the both of them furiously projecting “calm” and “gracious” and mellow-yellow glide patterns. I’m sorry, Roger, but as bright and stimulating as this show has been so far Iggy and Christy are, in a McLuhanesque sense, just two more Stepford co-hosts.

I wrote a year or two ago that the only way to break through this robot bind (and overcome the demands of those experienced TV producers who always make everyone sound and behave exactly the same) is to introduce drinks on the set. Glasses of wine or light beer, I mean — no hard stuff. And allow/encourage Iggy and Christy to imbibe and get gently bombed during taping. And show the glasses of cheer as they speak. Not to make them slurry or sloppy or rude but irreverent and happy and a little more impulsive.