At the urging of Santa Barbara Film Festival Roger Durling, I went last night to Neil LaBute‘s reasons to be pretty. A fiercely written and brilliantly acted (especially by costars Marin Ireland and Thomas Sadoski) twentysomething relationship drama, it’s the most emotionally affecting and — curiously out-of-character as this sounds — compassionate LaBute work ever. It’s surely the most satisfying live experience I’ve had in this town since God of Carnage, and the wisest $111 I’ve spent in a long , long time.

But brush away descriptions of reasons to be pretty (the lower case is mandated the play’s marketers) as a blistering examination of why male-sourced affirmations of conventional attractiveness are seen as vital by their female partners. For this is a bracing dive into wrenching emotional waters and a full-on dunk into 21st Century relationships among GenX/GenY clock punchers.

The four-character play is primarily a growing-up saga as experienced by Sadoski’s Greg — a morally aware and likably literate guy working a dead-end factory job and living with Steph (Ireland), his girlfriend of four years. Greg’s coworker and confidante is Kent (Steven Pasquale), a bright but loutish stud-muscle type married to Carly (Piper Perabo), who works as a security guard at the factory.

The story is triggered by a remark Greg has made to Kent (overheard and reported to Steph by Carly) that he considers Steph’s face to be “normal,” which means, of course, well short of hot, pretty, fetching, foxy, etc. He tells Steph in the play’s opening argument — a corker — that he meant this as a compliment, which she rejects out of hand. To her (and to most women out there, I presume) “normal” is a primal and devastating slap to the soul, and she’s so enraged that she leaves him hours later. [More on this in a piece called “Just Hot Enough.”]

The meat of the play is about how this loss shocks Greg and causes him to start listening to himself and his friends more carefully, and where this process finally takes him. 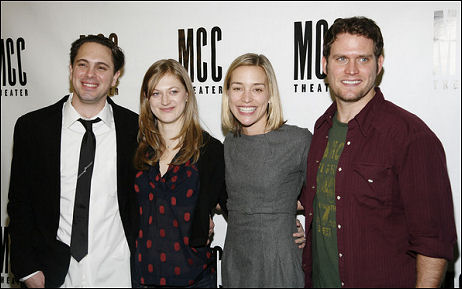 The final scene between Greg and Steph is one of the saddest and most moving what-might-have-been exchanges I’ve ever witnessed in any context. Not in a play or a film — in my life, I mean. Sadoski and Ireland are flat-out devastating. This is what world-class relationship dramas do, I told myself as I watched. It’s not that movies don’t deliver dialogue and acting of this calibre — they don’t even seem to try. Most of the time they don’t even step into the batter’s box.

And there are people who’ve actually said they don’t understand what this play is about or why it was produced…God!

I’d like to see reasons to be pretty again soon and take Jett with me, but I’d better move quickly, I gather. Durling and other sources are reporting that ticket sales have been slow all along, and that without a Tony win on Sunday night — it’s been nominated for best play and best lead male performance in a play (i.e., Sadoski) — it may close soon after. Unfortunately a 6.5 pulse-taking piece by N.Y. Times reporter Patrick Healy suggests that it won’t win on either count. Life is unfair and then some.