Here’s another Toronto Film Festival add-on: Luca Guadagnino‘s I Am Love, an allegedly immaculate Visconti-esque family melodrama set in Italy. Variety‘s Jay Weissberg, reviewing from the Venice Film Festival, calls it “a stunning achievement in every sense.” Tilda Swinton and Marisa Berenson are the Anglo costars among an all-Italian cast. 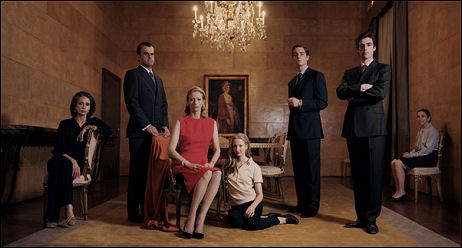 Guadagnino, he says, “does more than expertly craft space; he exposes the world of a wealthy Milanese family with astonishing accuracy, recalling Visconti in his ability to analyze upper-class mores and make them feel vital. Marked by flawless art direction and casting, this is the sort of film that sends viewers racing back to the helmer’s earlier pics, asking ‘What did I miss?’ While not populist enough to become a hit, I Am Love is the kind of exceptional Euro arthouse film that will generate buzz worldwide.

“A beautiful opening, in a snow-covered Milan (expertly simulated during a summer shoot) sets the tone, as the Recchi villa prepares for the birthday lunch of aging paterfamilias and industralist Edoardo Sr. (Gabriele Ferzetti). Edoardo Sr. proclaims that his son, Tancredi (Pippo Delbono), has never disappointed, but it’s Tancredi’s son Edoardo Jr. (Flavio Parenti) who embodies the best of his aristocratic breed.

“On the female side is Emma (winton), swept up by Tancredi years earlier in Russia and brought back to Milan to be his wife. Besides Edoardo Jr., they have another son, Gianluca (Mattia Zaccaro), and an artist daughter, Elisabetta (Alba Rohrwacher).

“Sometime after the luncheon, the old man dies, leaving the ultra-sophisticated Allegra (erenson) a widow. Emma discovers Elisabetta is lesbian, and though shocked at first, she soon views her daughter’s independence as a model for her own liberating transgression.

“At that fateful luncheon, Edoardo Jr. introduced his mother to a chef, Antonio (Edoardo Gabbriellini), with whom he plans to open a restaurant. On a visit to the city of Sanremo, Emma is drawn to an Orthodox church (her past) until she glimpses Antonio (her possible future). She follows him in a brilliantly lensed sequence that’s pure Hitchcock, down to Swinton’s chignon; what’s breathtaking here is that the scene isn’t merely imitative, but plays like a learned response to the master’s style. 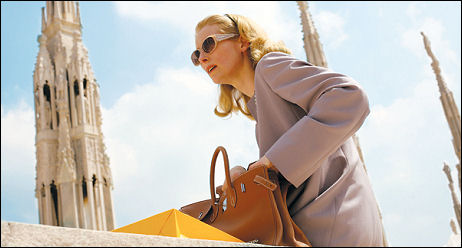 “Shortly afterward, Antonio and Emma make love outdoors, the air and insects trembling with energy as the music recalls Stravinsky’s vibrancy.” (Wells insert: Stravinsky and insects?) “While the women glimpse life’s new possibilities, the men are largely focused on profit — unalloyed representatives of a class that no longer feels the need to take care of its workers. However, Edoardo Jr., far closer to his mother than to his father, is unable to stomach the crass commercialism.

“Rejecting the common notion that working-class stories are somehow more legitimate than tales of the rich, Guadagnino proves that grand tragedy has the power to move, no matter the setting. The parallels with Visconti don’t end with the milieu, but are reflected in the extraordinary attention to detail, and more importantly, the palpable sense of how the characters are molded by their physical and psychological environments. Though Emma is the most fascinating figure, the others hold equal weight, thanks to the accuracy of the writing and the exceptional performances.

“Swinton (who first collaborated with Guadagnino in his 1999 debut, The Protagonists) does more than mechanically master the Russian-inflected Italian dialogue; she brings the full weight of her creative physical force to bear on Emma. Delbono, Parenti and Rohrwacher are ideally cast, and Berenson is simply perfection. Not to be left out is Maria Paiato, magnificent as the housekeeper Ida, especially in the final scenes.

“Every camera angle is interesting and confident without being showy, just like the family itself, while small, quick details beautifully underline emotions. Yorick Le Saux’s quietly brilliant lensing reinforces the necessary integration between the superb set design and the actors, and John Adams’ music, including excerpts from his operas, are exquisitely chosen.”