Is What It Is

I watched Che again last night and received the same fortifications, which made me feel wonderful. But the spiritual seep-through factor, truth be told, felt about the same as what I got from my second viewing in Toronto. So it’s a two-timer more than a threebie. Nothing wrong with that. It’s an incredible thing to sit through and let into your head and heart. I love this line of David Poland‘s — “Che is Brando to most biopics’ Heston.” 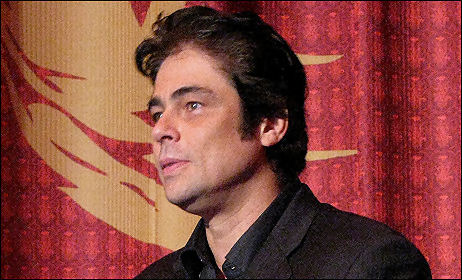 Che star Benicio del Toro prior to last night’s 6 pm showing of Che, which actually started about a half-hour late. 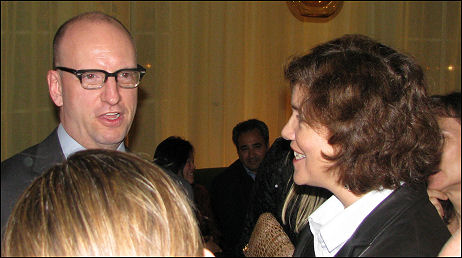 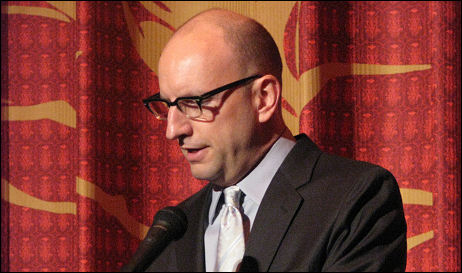 But after talking with journo pals at the Che after-party, it appears that I’m still in the minority in my passions, save for the opinions of Poland, Kim Voynar and I don’t know how many others. Poland’s Toronto Film Festival review is one of the most mature and perceptive things he’s ever written.

The best line of the night came from CHUD’s Devin Faraci. Part one of Che, or the “upper” half which tells the story of the Cuban revolution of ’57 to early ’59 (and titled The Argentine), is a metaphor for the Obama campaign. (I was thinking this exact thought as I watched it last night.) And the second half about the calamitous Bolivian campaign (and called Guerilla) is a metaphor for McCain-Palin.

A 20something columnist who shall go unnamed faulted Che for not explaining who Guevara is politically and where he’s coming from as a man. That’s partly true — it would help to review the Che Guevara Wikipedia page before going to the film. Is that too much of a homework assignment for the gamer generation? Reading a Wikipedia page for 10 or 15 minutes? Probably.

But what does the above columnist’s opinion say about the education levels out there? You can point to ignorance about anything as a reason why you can’t get into this or that film. Where do you stop with that rationale? If you go into this film as a 100% uneducated overall-wearing No Time for Sergeants yokel, yes, you may not understand from the information in Che who Guevara really is deep down….but who wants to make a movie for yokels? We know the answer to that one, don’t we?

For its bracing aliveness and atmospheric transportation effect alone I have Che locked down in my head as one of the incontestably great films of the century so far, and by any yardstick one of the most profound exercises in atmospheric mood politics of all time. As well as (why stop there?) one of the great unconventional “non-dramatic” mass mind-fucks of all time. Culturally, politically and soulfully, Che is about as far away from the Che Guevara poster-and T-shirt marketing mentality as a Che Guevara film could be. I’m on my knees because of this distinction alone. 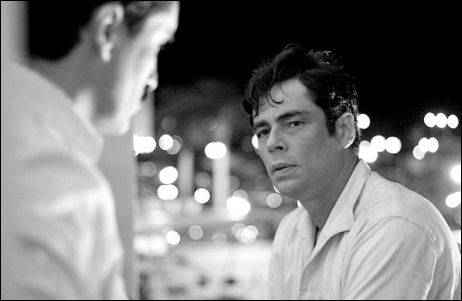 “The movie is, in many ways, a more-intimate-than-possible documentary (thus, a fictionalized narrative),” Poland wrote. “Instead of telling us things in dialogue or setting up dramatic moments that makes ideas obvious, Soderbergh & Co let Guevara and The Castros and the rest show themselves in the way people really show themselves — in small, human, real moments.

“They also force the audience to keep its awareness of the future events in check — first, what happened, but the future we all know stares us in the face. This is no revisionist history. There really is no effort to define the politics around these men, but simply to allow them to express what they felt they were doing or what they told others they felt they were doing.

“There is great effort to work, in both films, with the true experience of the men and women fighting the fight. This is one of the real feats of Soderbergh’s work here. Unlike The Hurt Locker, which does a great job of sharply defining the mechanics of the work of bomb defusing teams (which happen to be in Iraq), this detail is about the feel of the human effort, both on the side of the fighters we are watching and the rural people that they are navigating while also fighting national military forces.

“For people looking for a snap-and-slap testament to Che Guevara’s greatness or his hypocrisy or anything definitive, this will never quite work. It just isn’t a straight biopic. It has more in common with Malick’s The Thin Red Line and the second half of Kubick’s Full Metal Jacket than any more traditional war epics There is a bit of Patton, in conceit though not remotely in character, as well.

“Soderbergh and his collaborators have taken the story of Che’ Guevara to define their ideas much the way Robert Bolt did for Lean, though this film creates intimacy like Bolt created epics (though Lean hired actors who brilliantly undercut the stuffiness of Bolt to make most of their films together a perfect balance). Che is Brando to most biopics’ Heston.”