Michelangelo Antonioni‘s Red Desert (’64) will screen this Friday (7.28) at the Walter Reade. Oh, that red hair and pale skin, that black mud and those gloomy gray skies and general sense of sprawling ecological ruin…mother’s milk to me.

I saw Red Desert for the first time two years ago. I know the Antonioni milieu, of course, and had read a good deal about it over the years, so I was hardly surprised to discover that it has almost no plot. It has a basic situation, and Antonioni is wonderfully at peace with the idea of just settling into that without regard to story. And for that it seemed at least ten times more engrossing than 80% or 90% of conventional narrative films I see these days, and 87 times better than the majority of bullshit superhero films. 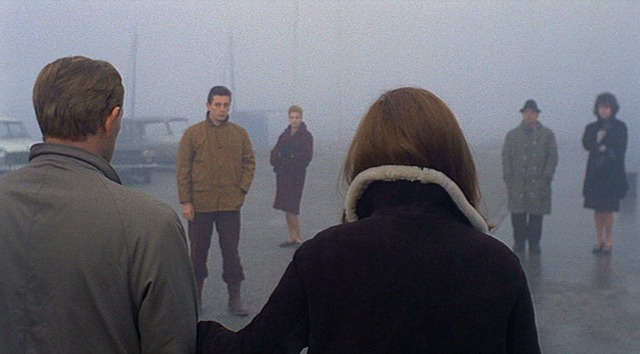 Monica Vitti plays a twitchy and obviously unstable wife and mother who’s been nudged into a kind of madness by the industrial toxicity around her, and Richard Harris is an even-mannered German businessman visiting smelly, stinky Ravenna, a port city on the Adriatic, to arrange for several Italian workers to perform a long work assignment in lower Argentina.

You suspect that sooner or later Harris, whose hair has been dyed an odd brownish blonde, will make a move on Vitti but other than that nothing really happens. It’s about industrial sprawl and poisoned landscapes and a lot of standing around and Vitti’s neurotic gibberish and a certain caught-in-the-mud mood that holds you like a drug, specifically like good opium.

Harris and Antonioni did’t get along. Harris didn’t like being told to do this or that without discussion, and near the end of shooting he walked off the set. Or was fired. Blowup star David Hemmings wrote in his autobiography that Harris left the film after punching Antonioni, allegedly with a few of his scenes left to be shot.

There’s also the story about Harris having dropped acid when the film was shooting in Rome (sometime in late ’63, post-Cary Grant, pre-Beatles) and having acted eccentrically while tripping. Something to do with getting wet in the Trevi fountain and smashing bathroom mirrors. 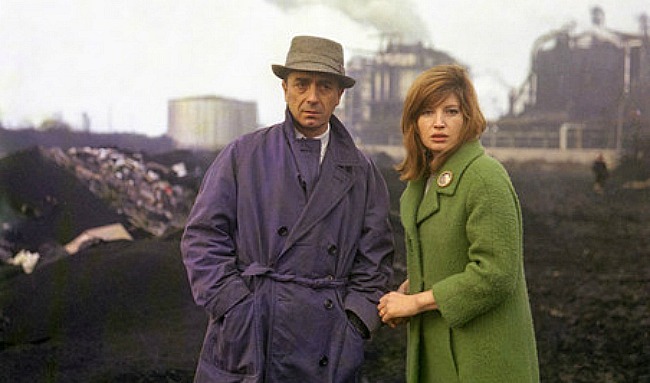