Yesterday “Page Six”‘s Richard Johnson reported in the N.Y. Post that a “source” is claiming that Martin Scorsese‘s The Irishman, the likely swan song of Scorsese’s career as far as mafia wise guys are concerned, may cost $175 million, and that’s without marketing.

On 2.9.18 Deadline‘s Anita Busch reported that “we are now hearing from multiple sources that the film’s budget is well over $125M and more in the $140M range (and climbing).” In late February Forbes‘ Scott Mendelson echoed Busch’s report that the Irishman is costing $140 million or thereabouts. 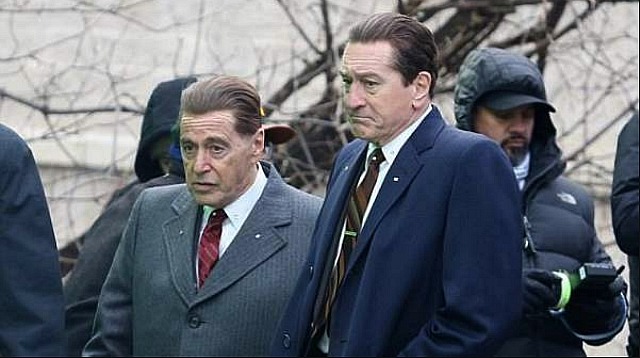 Add the standard marketing costs (usually $85 to $100 million for a major feature) to Johnson’s $175 million figure and the total Irishman tab is in the vicinity of $250M. Add the same to Busch/Mendelson’s $140M and you’ve got $225M or thereabouts.

Being a Netflix release that almost certainly won’t have an extensive theatrical run, The Irishman isn’t subject to the usual financial arithmetic of a typical feature from a mainstream distributor, but $175M or $225M or $250M tabs are certainly stand-outs in the realm of a non-fantasy, straight-goombah period drama.

Robert De Niro, Al Pacino, Joe Pesci, Bobby Cannavale, Harvey Keitel and Ray Romano are the Irishman costars. Anna Paquin is apparently the only actress of any note in the film.

Johnson reports that Netflix bought the film for $105 million and agreed to a $125 million budget. But costs have soared to $175 million, said one insider, ‘and they haven’t done the music yet.’ (Not to mention the de-aging CGI.) The shoot, with locations all over the tristate area, started in August and wrapped earlier this month.

The Irishman won’t open until ’19. Given the stakes it will almost certainly opt for an award-season release (October or November). So we’re looking at another year-plus before we even see the first trailer in July or August ’19. I’m naturally presuming that said trailer will showcase De Niro as a 30 year-old.