Tron: Legacy “may be the best movie I’ve ever seen that possesses a truly awful script,” says Film and Felt‘s Gabe Leibowitz. “There’s no sugarcoating it — the screenplay alternates between predictably hokey (a sunrise sequence is particularly galling), and flat-out cheesy (most of the dialogue exchanges). 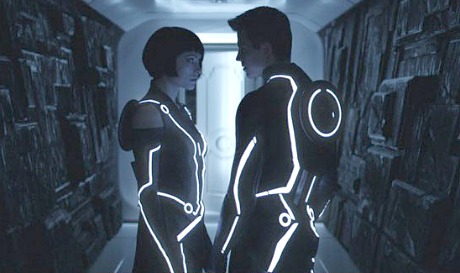 “It’s less the romantic subplot between the freewheeling, seemingly-orphaned Sam Flynn (Garrett Hedlund) and the mysterious Quorra (Olivia Wilde ), which thankfully doesn’t get enough screentime to become a serious detriment. Rather, it’s the father/son relationship between former gaming/technology mogul Kevin Flynn (Jeff Bridges, reprising his role in 1982?s original Tron) and Sam that’s especially offensive on the ears. Seemingly every other exchange between the two contains some form of cloying schmaltz that should evoke regular snickers from the audience.

“The acting isn’t any great shakes either. Bridges is passable at times, but too often seems to be channeling The Dude from The Big Lebowski: seriously, he should never be allowed to say the word ‘man’ again. The rest of the cast mostly looks the part, but lack any sort of real acting chops.

“But you didn’t go to the IMAX theater near you to listen to Kevin or Sam wax poetic, did you? You came to break out the popcorn and get gloriously lost in [this] sweeping world, and here, Tron: Legacy succeeds brilliantly. With a first-rate, pulse-pounding soundtrack by Daft Punk and dazzling CGI, the action is rhythmic and often mesmerizing. A battle in ‘Zeus’s lounge’ is absolutely riveting (and Michael Sheen‘s Zeus is easily the coolest character in the entire film — he could easily be a droog), and indeed, most of the fights, chases and escapes are intense and thoroughly engrossing.

“Like Avatar, Tron: Legacy is more of an impressive experience rather than a great film, but there’s less pretension here, if not quite the capitalization of the IMAX technology.

“Tron: Legacy seems to be very comfortable with what it is — namely, a video game fan’s wet dream. At some point, all gamers have fantasized about being transported into their console, be it the vast lands of Final Fantasy VII or the battlefields of Call of Duty. Here, they get to experience it in all the modern, hyper-digitalized glory. Be sure to see Tron: Legacy in IMAX and with friends. It’s very entertaining, and accomplishes its goals with gusto — its strengths are so prominent that it’s easy to view its weaknesses as quibbles rather than serious detractions, presuming you go in with proper expectations.”