Remember What Scorsese Said Last May? 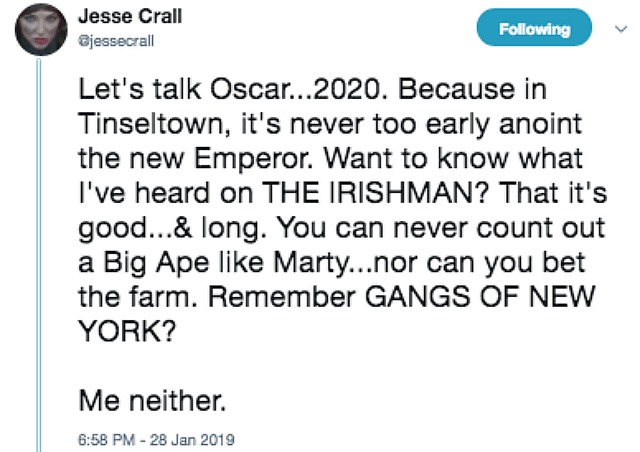 From “Will There Be Two Versions of The Irishman?,” posted from Cannes on 6.9.18: “I was jerked alert when Martin Scorsese mentioned that his forthcoming The Irishman, a $180 million gangster flick funded mostly by Netflix, contains about “300 scenes.”

“Right away I leaned forward and wondered if I’d just heard that. Because 300 scenes could translate into a helluva running time, perhaps as long as 450 minutes or 7 hours and 30 minutes.

“In other words (and I’m just spitballing here) The Irishman could wind up as an expanded Netlix miniseries in addition to being shown as a shorter theatrical feature. Who knows? I know that a film with 300 scenes will definitely be a bear, length-wise. Obviously too much of one for theatres, in fact, if Scorsese intends to use all or most of that footage.

“The average scene used to last two minutes, give or take. But scenes today are shorter, or roughly a page and a half or 90 seconds per scene. By this standard a typical two-hour movie might contain 75 to 90 scenes. If the scenes last 90 seconds a film with 75 scenes would run 112 minutes; if the scenes number 90 the running time would be 135 minutes without credits.

“If, let’s say, Scorsese does some seriously heavy trimming, The Irishman could end up with 200 scenes or a running time of 300 minutes (again based on the 90-second-per-scene scenario). But if he doesn’t heavily trim The Irishman and includes all 300 scenes, it could run as long as 450 minutes.

“Again, my guess is that Scorsese and Netflix may be contemplating releasing a theatrical version of, say, 120 to 150 minutes, along with a Netflix-only miniseries version lasting seven hours plus.

“Why would Scorsese mention during a press event that he’s working with 300 scenes if he’s not at least trying to use all the material that he has?”