Nationalist anti-immigrant sentiments have surfaced in several European countries over the last few years, and now Georgia Meloni, a hard-right, anti-immigrant politician whose principal affiliation is with the radical Brothers of Italy (Fratelli d’Italia), has been elected Italy’s prime minister.

It is fair to presume that Meloni’s’ victory is mostly about ground-level, Average Joe racism — wanting to protect traditional Italian culture from a feared flooding of the country and the culture by Middle Eastern and northern African immigrants.

The electoral ascension of the hard-right Sweden Democrats represents another cultural convulsion caused by this same concern.

N.Y. Times reporter Steven Erlanger: “European Union leaders are now watching [the Meloni] coalition’s comfortable victory in Italy…with caution and some trepidation, despite reassurances from Ms. Meloni, who would be the first far-right nationalist to govern Italy since Mussolini, that she has moderated her views.

“But it is hard for them to escape a degree of dread. Even given the bloc’s successes in recent years to agree on a groundbreaking pandemic recovery fund and to confront Russia’s aggression in Ukraine, the appeal of nationalists and populists remains strong — and is spreading, a potential threat to European ideals and cohesion.”

Wiki summary: “A right-wing populist and Italian nationalist, Meloni’s political positions have been described as far right. She is opposed to abortion, euthanasia, and to partnerships, marriages, and parenting by same-sex couples, instead asserting that nuclear families are exclusively headed by male–female pairs.

“She’s opposed to the reception of non-European migrants and multiculturalism, [and] has been accused of xenophobia and Islamophobia.

“A supporter of NATO, Meloni maintains Eurosceptic views regarding the European Union and was in favor of better relations with Russia before the 2022 Russian invasion of Ukraine, which she condemned, pledging to keep sending arms to Ukraine.

“She has also expressed controversial views, such as praising Italian dictator Benito Mussolini in 1996, and Giorgio Almirante in 2020, a Nazi collaborator and co-founder of MSI.

I’ve never heard any politician so perfectly explain what we’re up against and why we fight.

When you watch this video, you’ll quickly realize why the establishment is afraid of her.
pic.twitter.com/CswR8o3mjg 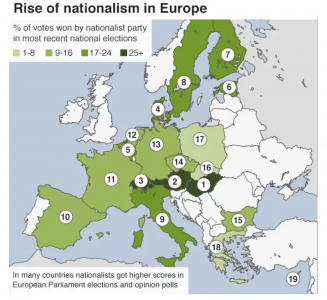 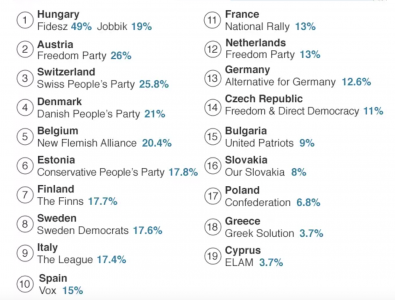 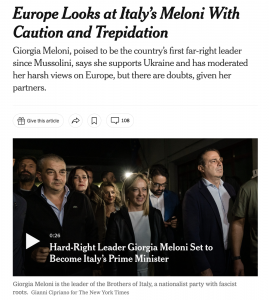 September 26, 2022by Jeff Wells39 Comments
« Previous post
The Camera is Predatory
Next post »
Thumbs Down on “Pearl”