Here’s a re-run of a piece I did a little more than two years ago about Heath Ledger‘s visit to the 2006 Santa Barbara Film Festival, and a q & a he did at the Lobero Theatre with Pete Hammond. The article was called “Measure of Ledger.” I was reading it earlier today and was struck by the second paragraph. The last line in particular: 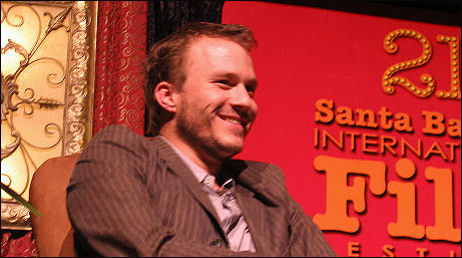 Heath Ledger submitted to a friendly dog-and-pony show at the Santa Barbara Film Festival last night. It was a nice evening — pleasant, heartening — and Heath seems like a right guy, but I don’t know what to say about him that doesn’t sound cliched or repetitive or flat.
He’ll be around for a long time, I think. That seems like a fairly safe bet. He’s 26 now — he’ll probably still be acting 40 or even 50 years from now, and in quality vehicles, given his standards and talent. I’ll be dead (probably) and he’ll still be acting. Nice thought.
I’ve never written a damn word about Ledger’s performance as “Skip” in The Lords of Dogtown because I never gave a shit about watching it (due to laziness…I had nothing against the film), but after watching him in a clip or two last night I now want to see it whole.
I think Ledger may be a bit like Laurence Olivier and Alec Guiness, which is that without a role to play (or a fake nose or an exotic accent to hide behind) he congeals and stammers on a bit and isn’t quite up to the charm levels of Jay Leno or Conan O’Brien or Jimmy Kimmel in front of a crowd.
Ledger is a gently spoken sort with what feels like a fairly strict sense of integrity. It’s no secret that he has one of those serious light-up-the-room smiles. Being Australian and somewhat expressive and non-taciturn, his voice isn’t the least bit Ennis del Mar-ish, but it does have a deepish timbre and a kind of rolling tonality. 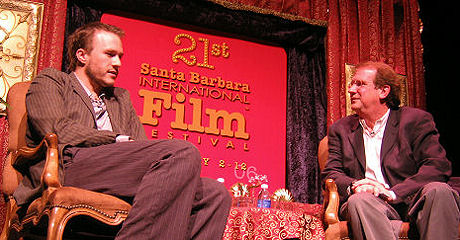 He’s a gifted, probably genius-level actor who right now seems to be about sixteen times more into spending time with his infant daughter than making new movies and pocketing huge paychecks, and is actually planning on not working at all for roughly a year. (He said something about living in Amsterdam when we spoke at the Focus Features after-party following the Golden Globes.)
I liked it that there was a loose tab or some kind of mini-tongue sticking out of the heel of his lace-up shoes, and I was staring at this thing for a while and thinking, “Yeah, funky- ass shoes…but I guess that’s Ledger and his I’m-not-your-father’s- idea-of-an-uptown-actor attitude.
He was pretty good at fidgeting around in his seat last night as he spoke to Hammond about this and that. He sat on his hands for a bit. His legs were kind of tucked under the chair, a bit like a British school kid doing detention. He said that auditions have always been awkward because he doesn’t like the feeling of being examined and judged.
Here’s that Manohla Dargis riff about Ledger’s Brokeback Mountain performance that I ran in WIRED last week: “I’ve almost always liked Ledger, but I didn’t think he had anything going on as an actor until Monster’s Ball. But while he was amazing for the ten seconds he was in that film, I wasn’t prepared for Brokeback, where he creates a world of pain with a tight mouth and a body so terribly self- contained it’s a wonder he can wrap his arms around another person.
“But here’s the thing,” she concluded, “and this is the part that’s hard to explain — I don’t just admire the performance on the level of craft, I am also deeply moved by it, just as I am by the film.”
SBFF director Roger Durling said the following at the end of the evening: “Movies reflect who we are, and in going to the movies we identify with the heroes and protagonists. When I saw Brokeback Mountain and Heath Ledger’s performance, I felt as if somebody had punched the wind out of me.
“It took me a while to understand that never before I had seen a character in a major Hollywood film that portrayed all the loneliness, self-loathing, the need to be loved and give love back that a gay man like me goes through, and I felt a personal form of catharsis watching Heath’s performance. He was kicking a door open that had been long shut, and for that I’m very grateful.”