Letter to friend, sent this morning: Jeff Sneider, Brian Truitt and Ed Douglas have supported your skepticism about Sarah Polley’s Women Talking. And thank God for you four and others who haven’t been intimidated by the #MeToo rank-and-file & have summoned the courage to calmly and sensibly call a spade a spade.

Your reservations have been respectful and all you were doing in re-tweeting Sneider, Truitt & Douglas was showing there are other dissenting voices out there.

You know what things were like in Telluride with the Justin Chang, Eric Anderson & Greg Ellwood kowtow crowd praising it to the heavens. And then finally the clouds parted in Toronto…breaths of fresh air!

Aside from my own less-than-delighted reaction I was told twice in Telluride, unprompted, by an elderly rich guy & a 40ish married woman that they “hated” Polley’s film. When the rank-and-file Academy & guild members get a look at this thing you KNOW what many of them will think. 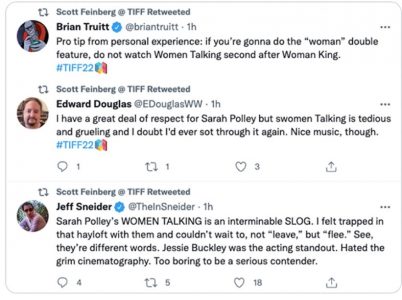 Neither you nor I hated it, but you know in your heart that it’s basically a dimly-lighted #MeToo “Waiting for Godot” in a barn, and that aside from the morally urgent narrative (of COURSE they should leave but (a) where are they going and (b) with what funds and (c) do they have tents and blankets and toilet paper?) & high-quality performances (principally from Jessie Buckley, Rooney Mara and Claire Foy) that it’s WELL below the compelling, confined-set standards of Lumet’s 12 Angry Men or Rope or Rear Window, and that it’s fairly agonizing to sit through and that the Women Talking experience is basically about waiting for it to end.

The basic idea, of course, isn’t that a few sex-starved, cold-blooded Mennonite men are brute beasts, but that the overall patriarchy (straight white men) is to be regarded with extreme suspicion as too many white males seem amoral, heartless and exploitive & probably need to be fought tooth & nail and perhaps even overthrown.

A friend feels Polley’s film is “almost comically male-hating.” When the wimpy and wimpering Ben Whishaw is the only male they can trust, you know what Polley is saying……”tearful, guilt-stricken-on-behalf-of-their-gender gay men are cool but forget straight guys!!”

Really? There isn’t one decent straight guy in the community who can be trusted? Not one regular dude who’s disgusted by the rapes and pledges to support the women? Imagine how the film could be spiritually and emotionally opened up, so to speak, if there was such a character. Or if a second straight male were to intrude only to speak skeptically about the assaults & argue against leaving.

Women Talking is oppressive because (a) it’s oxygen-starved and visually claustrophobic, (b) there’s no dramatic tension to speak of because from the perspective of the horribly brutalized victims it’s ludicrous to argue for staying, (c) the characters don’t sound like isolated Mennonites but smart, educated, worldly women playing their idea of isolated Mennonites.

In short, your skepticism about Women Talking is sensible and mature and certainly not extreme.