About ten days ago I ran a short comparison piece about The Hangover‘s Zach Galifianakis vs. Humpday‘s Joshua Leonard — similar faces, physiques (okay, Galifianakis is bulkier), attitudes and personalities, and the exact same beard (except for Zach’s being darker than Leonard’s, which is light brownish). Except last week I saw The Hangover and I re-saw Humpday last night, and there’s really no comparison — Leonard is by far the funnier and more charming of the two, and a much more fluid and readable and charismatic actor. 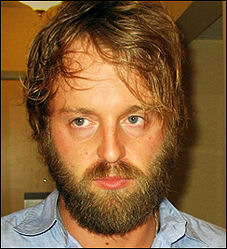 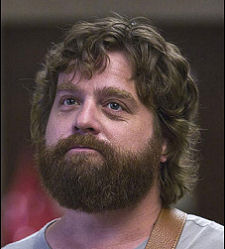 Galifianakis doesn’t have that much of a role in The Hangover. He’s playing the overweight man-child fingerpaint jerkoff, shuffling around in his underwear with his big pot belly making one-note cracks and acting like he’s 14 or 15, no older. Plus he has a higher-pitched voice that doesn’t have a whole lot of flavor or feeling. Leonard is developmentally arrested as well (stuck in his early to mid 20s) but he has this smooth buttery seductiveness and a lot of mirth and b.s. and oozy charm. He also seems compulsively, naturally honest. His character is that way, I mean, but Leonard himself seems to have a kind of unpretentious natural-dude thing going on. He’s a little like Owen Wilson, only warmer.