It’s not a rumor and there’s absolutely no question about it: Ridley Scott‘s 190-minute “extended cut” version of Kingdom of Heaven is a considerably better film than the 145-minute theatrical version that opened last May (and which came out on DVD on 10.11). I saw it yesterday afternoon at the seedy-but-functioning Laemmle Fairfax in West Hollywood. The projection and sound were fine, but why is a must-see, calling-all-cars revival like this playing in a theatrical equivalent of a doghouse? 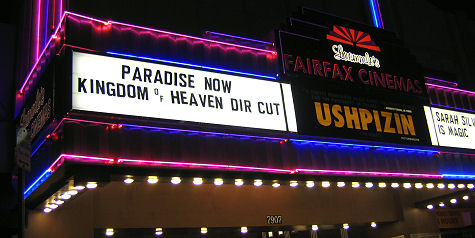 Stand-up critics ought to review this version for history’s sake, for the sake of salu- ting top-grade filmmaking…whatever. An obviously improved version of what was a respected film to begin with, and from a major director…attention should be paid. When a film this admirable is deliberately gutted by a major studio, critics have an obligation to assess what was what.

Scott has made it clear this is the preferred version. But it shouldn’t just play to an audience of five or six people (like it did at yesterday afternoon’s 3:45 pm show) in a sub-run theatre and be forgotten.
Every good movie has a prime “fighting weight.” 190 minutes is what Kingdom of Heaven should have been all along, and seeing it at this length proves it.

One presumes the 190-minute version will come out on DVD down the road, but who knows? It’s not that Fox publicists won’t answer any questions. They just don’t know anything (they say), and Kingdom of Heaven is obviously not a priority at this stage, etc.

Last May’s Kingdom was a painterly, politically nutritious meal that felt more than a touch truncated and a bit shy of playing like a true epic-type thing. The longer cut makes it into a fuller, tastier, more banquet-y type deal…sweepier and more sumptuous and better told.

The extra 45 minutes or so adds a good deal more in terms of story and character to an extremely moral (I would call it ethically enlightened), highly perceptive, anti- Christian-right epic.

Orlando Bloom as Balian in Ridley Scott’s Kingdom of Heaven

Pretty much every character (except for Ghassan Massoud’s Saladin character, who still generates as much panache and admiration as Orlando Bloom’s Balian) seems more interesting and filled out. And it reveals a significant new character (the blonde-haired son of Eva Green) and a sub-plot about his fate that the shorter version had completely eliminated.

As exacting and stirring as it is in many respects, the improved Kingdom is still, for me, more of a 90% rather than a 100% thing. There’s still something slightly opaque about it. But the longer version is certainly a finer and more substantial film. And this fact makes Fox’s decision to release its shorter, runtier kid brother seem more than a little distasteful.

Only an idiot could have watched both versions last spring (or late winter…whenever it was that Fox and Scott sorted things through) and not realized that the 190-minute version was the distinctly better film.
Obviously the 145-minute version was released to make room for more shows per day, although the movie was a disappointment anyway. It would up making about $200 million worldwide, which, for a movie that cost $130 million to shoot, wasn’t enough.

The decision to put out the shorter Kingdom of Heaven was a shameful dereliction of duty in terms of…okay, an admittedly sentimental responsibility that nonethe- less ought to be embraced by all distributors and filmmakers, which is to put the best films they can make before the public. 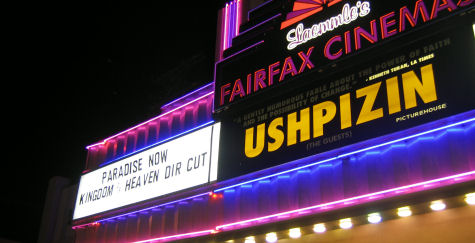 In deliberately releasing a not-as-good version in order to increase the chances of making more money during the first 14 days of release, Fox did the “right thing” from the point-of-view of the stockholders, but they betrayed the ticket-buying public…they really did.

Fox and Scott (who didn’t squawk at all about the shorter version being released, and who therefore bears some responsibility) were following a familiar pattern.

DreamWorks pulled the same crap when they released the not-as-good version of Almost Famous instead of the obviously better Unititled that came out on DVD later on. Warner Bros. and the Ladd Company did it also in the early ’80s with a truncated version of Once Upon a Time in America. It’s happened with some other worthy films.

What hasn’t changed about Kingdom of Heaven? All the stuff that was good to begin with.
It’s a big-canvas historical drama that dares to be different by being complex and unusual, and altogether a textural masterpiece.

Has there ever been a big expensive film about warring armies in which one side didn’t triumph absolutely? In which the loser wasn’t totally beaten down and slaughtered? I felt amazed and lifted up when this didn’t manifest…when life and sanity, in effect, is chosen over death and fanaticism. 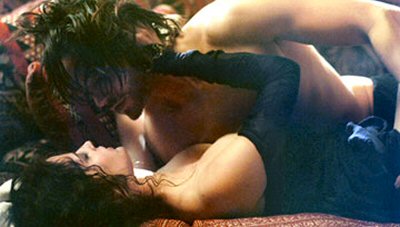 New York Times reporter Sharon Waxman wrote a piece last weekend about how the financial failure of Kingdom of Heaven and Elizabethtown (along with the under- whelming U.S. response to Troy) has cast a dark shadow on Orlando Bloom’s career.

All that went out the window when I watched him again yesterday. Bloom may have missed the boat in Cameron Crowe’s film, but he’s got heft and range and really knows how to play a stalwart hero.

The words I wrote last May still apply: “Bloom is bearded, grimy, quiet and steady throughout Kingdom of Heaven. He is manly, in short, and does that classic Jimmy Cagney thing — planting his feet, looking the other guy in the eye and telling the truth. Does he channel Laurence Olivier? No, but Bloom has definitely held his ground here.”

I suppose that the political attitude of this film — respectful and even admiring of the Muslims, contemptuous of the arrogant Christian attitudes that led to war — is partly what I love about Kingdom of Heaven. 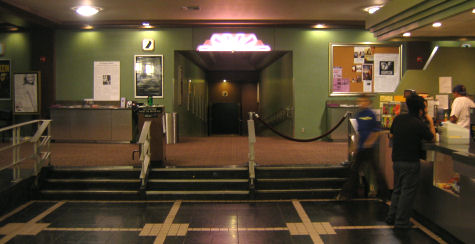 It’s obviously an impassioned f.u. to the Bush administration’s rationale for being in Iraq. It addresses the fundamental folly of being an occupier, and in fact offers an honorable solution for those who find themselves in this situation.

Her face is pale and plain and vaguely trembling in Ang Lee’s film, and with short, sort-of-mousey red hair. Very much a cowering but compassionate farmer’s wife from Wyoming. But the woman who opened her apartment door at 6 pm on New Year’s Eve was a pert and sophisticated New Yorker in glasses, her blondish-gray hair cut even shorter and her eyes the opposite of morose. 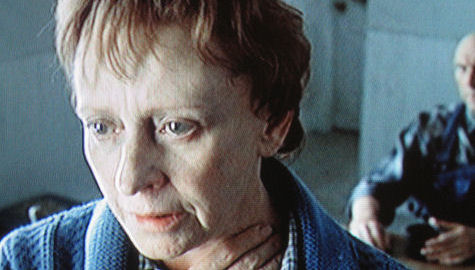 Imagine that! An actress who can not only manipulate her appearance but do a little internal tossing of the emotional salad.

Maxwell isn’t the only Brokeback Mountain actress who supplies a strong dose of hurt — there’s also the excellent Kate Mara and Linda Cardellini as Heath Ledger’s daughter and jilted girlfriend, respectively, on top of Michelle Williams and Anne Hathaway’s lead performances as unhappy wives — but Maxwell makes her mark in what is arguably the film’s penultimate scene.

It’s obvious that Maxwell’s mom and her scowling homophobic husband (played by the great Peter McRobbie) know what kind of relationship Ledger’s Ennis del Mar had with their son Jack, but her grief-ridden face is full of acceptance and compas- sion when del Mar pays a visit. And all of this hemmed in by fear of her husband’s rattlesnake temperament.
It’s the quiet but devastating interplay between Maxwell, McRobbie and Ledger that increases the film’s sadness to peak strength and sets up the film’s final hit, which comes when Mara tells Ledger she’s getting married to an oil-field worker named Kurt, and then leaves him alone in his trailer with Jack’s shirt hanging in the closet.

In fact, the more you watch Maxwell’s scene (I have a DVD screener of the film), the more clear it becomes that her underperforming of this exquisitely shot denouement is the emotional springboard of that last ten- or twelve-minute section. She’s got the whole film in her eyes. 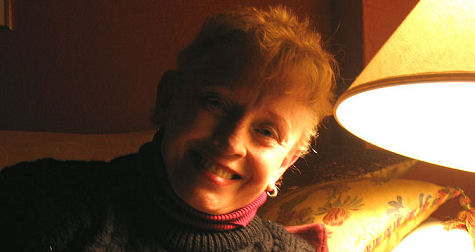 And she had only a few hours to make it work.

Maxwell shot her footage in July 2004, not on a set but inside the rundown farm- house seen in the film, which is located about an hour outside Calgary, Alberta, which was a cheaper place to shoot than Wyoming, where most of the film’s story unfolds.

“When I arrived at the set, people were getting ready to leave,” she recalls. “It was the very end of the shoot.”

Jack’s mom is “a lifelong Pentecostal Christian,” says Maxwell. “And in this last scene we see this tension and fear about what she knows her husband feels about this relationship, and about great cruelty and suffering she has endured herself, but she shows compassion to Ennis because she can see Jack was obviously very much loved.”

Maxwell suspects that Brokeback Mountain‘s casting director Avy Kaufman arranged a meeting with director Ang Lee a few months earlier because she had played the mother of Sean Penn’s condemned prisoner in Dead Man Walking (’95) and “so I have a history of sad mothers.”

She sensed during her sit-down with Lee that “we had connected on a level that would make me a very strong competitor [for the part].” 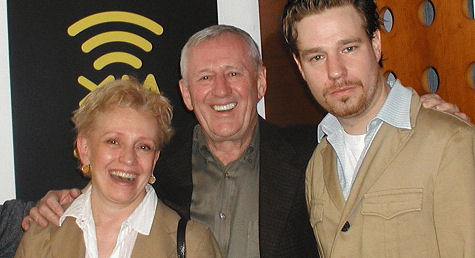 Maxwell, Len Cariou and director Ethan McSweeny during a promotional stint on behalf of a relatively recent Pace University production of “The Persians.”

Brokeback Mountain had been showing to industry and festival audiences since early September, but Maxwell didn’t see it until it opened commercially on December 9th.

“I was really shocked by the scene, by our scene,” she recalls. “The starkness of it…the simplicity. And how [Lee] shot it, like when I put my hand on Heath’s shoul- der. I grabbed my friend sitting next to me. It was so strange, this old hand…I said to myself, is that mine?”

Maxwell began as a child actor in the ’50s, and has done lots of New York theatre, television, TV movies and features.
Her Dead Man Walking performance was, if you ask me, the big standout before Brokeback Mountain. She played the judge in Jonathan Demme’s Philadelphia (i.e., the one administering when Tom Hanks collapsed in court). And she had the lead female role in the 1975 debut stage production of Peter Shaffer’s Equus with costars Anthony Hopkins and Peter Firth. (That’s right…the naked-in-the-stables role.)

Maxwell was told in early October that her performance was special by none other than Annie Proulx, the author of the “Brokeback Mountain” short story that Larry McMurtry and Diana Ossana’s screenplay is so closely based upon. The advance review came in the form of a letter, and it brought Maxwell to tears. 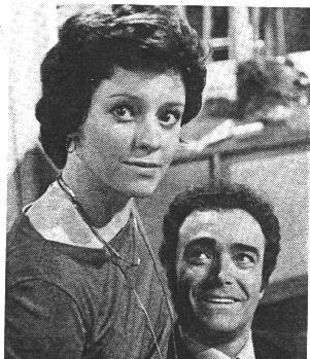 It reads: “Dear Roberta Maxwell — Just the right touch…the almost-crushed wife of a martinette who under his very nose and in only a few lines about cake and coffee, gets across the message that she knew and understood what Jack meant to Ennis. I don’t know how you did it in so small a compass. With much apprecia- tion, Annie Proulx.”

Maxwell read this to me aloud near the end of our talk. Here’s a recording of about half of it.
She asked last night how I think Brokeback Mountain will do at the Oscars, and when I repeated the conventional wisdom that it’s the Best Picture front-runner, she feigned surprise. I would play it that way if I were her.

Maxwell told the Toronto Star‘s Martin Knelman that she’ll be visiting Los Angeles soon “so I can enjoy the fun of Brokeback being touted for the Oscars. It’s such a special time and such a special film. Why not enjoy it while it lasts?”

If it were my call (and I can’t imagine Focus Features not feeling the same way), Maxwell will wind up sitting next to her costars and Lee and the film’s producer James Schamus and all the others at the Oscar Awards. If there’s anyone apart from the core players who deserves such an honor, it’s Maxwell.

January 4, 2006by Jeffrey Wells95 Comments
« Previous post
The Envelope’s Steve Pond is
Next post »
The hard-working professionals in charge