“Resurrecting” the life out of me

Rod Lurie‘s Resurrecting The Champ (Yari Film Group, opening today) is a well acted, throughly decent film that is reasonably absorbing as an adult drama and interesting in an atmospheric newsroom sense. I’m a solid fan of Alan Alda and Peter Coyote‘s performances as a newspaper editor and a boxing world veteran, and I’m fairly okay with Josh Hartnett‘s performance as a somewhat immature journalist who can’t be bothered to double- or triple-check his facts before running with a big story. 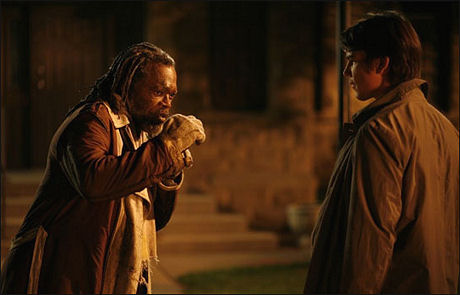 The plot is about Hartnett having found a scuzzy old homeless guy (Samuel L. Jackson) who may or may not have been a boxing champ in the ’50s, and the truths that come out when he runs a story about the wily old guy. The problem is that I despise sloppiness and inexactitude, and I couldn’t for the life of me understand how any journalist, Hartnett’s character or anyone, could mess up as badly as he does here.

There are no secrets out there, and you can double and triple-check anything in a few hours these days. I just didn’t relate or buy what happens. The only thing that made sense was Hartnett’s guy deliberately fucking up, and I’m not a big fan of stories about guy putting shotguns in their mouths and then pulling the trigger.

At first I had a problem with Jackson’s “whinny” voice. Like with all movie stars, I want Jackson to be Jackson. He’s “acting” here, talking a little bit like Dustin Hoffman did as the 105 year-old Jack Crabbe in Little Big Man, but there’s no denying that it’s good acting. I could sit here and struggle to put together exactly the phrasings, but it’s easier to just quote N.Y. Times critic Stephen Holden, who’s a tad more enthusiastic about Jackson than myself but we’ll let that go.

Jackson is “wily, secretive, charming and pugnacious.,” Holden writes. “At his most charismatic he has the aura of a holy fool…[he] is entirely convincing, and frequently incandescent.” 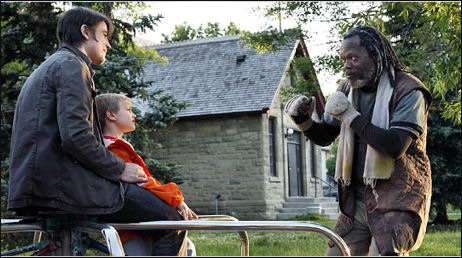 Champ is also about Hartnett’s slightly older wife (Kathryn Morrris) who has one of the worst pissy-face, naggy-face, guilt-trip expressions you’ve ever seen on any woman anywhere.

In the version of Resurrecting The Champ that I saw last year, Lurie plays a walk-on role as an editor/journalist, and he’s relaxed and believable right rom the start. Lurie should use himself again and again — seriously. He could be the new Sydney Pollack among acting directors.

Resurrecting the Champ hasn’t been tracking all that well, and probably won’t crack $5 million over the weekend. It’s worth seeing for Alda, Jackson and Coyote’s performances, in that order Right now it has a Rotten Tomatoes rating of 62% general and 45% Cream of the Crop. I don’t know what else to say except that it’s a tough world out there — a mosh pit.