Timothy Shriver, chairman of Special Olympics and a columnist for washingtonpost.com’s On Faith, has written a clueless editorial that slams Tropic Thunder for its retard jokes regarding Ben Stiller‘s “Simple Jack” character. 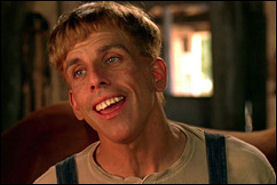 Which, incidentally, is quite funny. And yet funny within Thunder‘s satirical context, which is all about dissecting actors and their massive egos, and the Hollywood hot-shots who pay, flatter, kowtow to, represent, cajole and undermine them.
The bit between Stiller and Robert Downey, Jr. about the pitfalls of “doing full retard” refers to the fact that only one Hollywood actor has played a mentally handicapped guy in a thoroughly realistic full-retard way — Sean Penn in I Am Sam. That means without throwing little extras and grace notes into the performance that charm the audience in to thinking, “Ahh, he’s only half-retarded — the other half is pretty smart or clever or even genius-level.”
“I have not been given the chance to see the movie,” Shriver writes. “But I’ve seen previews, read about it and read excerpts of the script. By all accounts, it is an unchecked assault on the humanity of people with intellectual disabilities — an affront to dignity, hope and respect.”
Shriver’s editorial is just another arched-back, not-very-hip response by a Stalinoid wonk to an artist who had the gall to ignore p.c. standards in order to make a point or tell a joke.
As HE reader Christian Hamaker says, “This poor guy’s position requires some sort of outrage, but he hasn’t seen the film and is basing his reaction to words on a page. Seeing the ‘retard’ exchange in print, without the context of two preening actors discussing their craft (one of whom has had his skin chemically altered to resemble and African American), is a disservice to the movie.
“I’m not sure the audience I saw this with wasn’t howling because they find discussion of ‘retards’ funny, but I’m guessing that most of the laughter had to do with the ‘inside’ actor talk about what does, and does not, constitute legitimate Oscar bait.” I know that’s why I was laughing, in any event.”