Magnolia is opening James Gray‘s Two Lovers, which screened nine months ago in Cannes, tomorrow in theatres and on VOD on 2.16. Here again is my Cannes review, which is fairly well written and comprehensive if I do say so myself: 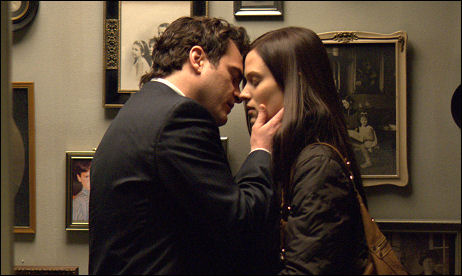 Two Lovers is attractively composed and persuasively acted but, for me, a slightly too earnest and on-the-nose drama about romantic indecision. But it’s not half bad — a little Marty-ish at times, maybe a bit too emphatic here and there, but nonetheless concise, reasonably well-ordered and, for the most part, emotionally restrained and therefore believable.

Unlike Gray’s The Yards and We Own The Night, there’s no criminal behavior in Two Lovers, and the absence of this — no resorting to gunplay, car chases or fist fights — has naturally led Gray in a gentler, quieter direction. It’s mainly a mild-mannered borough family film, and fairly decent in that regard. I’m not a lockstep Gray fan — I was mostly okay with The Yards but disliked We Own The Night. But for what it’s worth, I think Lovers is his best yet.

Leonard (Joaquin Phoenix) is a lonely, less-than-worldly, recently suicide-prone guy, reeling from a busted relationship and living with his parents (Moni Moshonov, Isabella Rossellini) and working for his dad’s dry-cleaning store. The movie kicks in when he finds himself torn between Sandra (Vinessa Shaw), a sweet, wrinkle-free Brooklyn girl who wants to get married and do the usual-usual, and Michelle (Gwynneth Paltrow), a scattered, impulsive blonde who lives in Phoenix’s parents’ apartment building and is obviously “trouble” from the get-go.

Guess which one Leonard has the major hots for? Naturally. 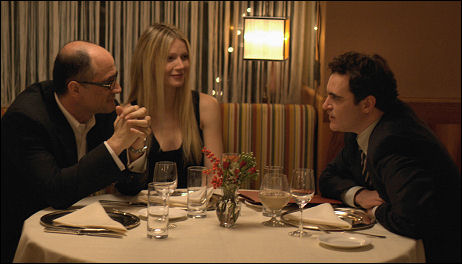 Leonard’s passion for Michelle is partly due to her being hot shiksa material, but also because she’s very much the big-city girl. His sincere but less passionate feelings for Sandra are precisely about her being a home-and-hearth type — stable, loyal and not exciting enough. As Leonard is also a fairly decent photographer, he understandably sees Michelle as spiritually linked to the big “out there” where his talent may some day be recognized — a place where people may see more value in his work than his family and neighborhood friends, who look at his stuff and say “yeah, pretty good” and then ask him to photograph weddings.

I was disappointed that Gray didn’t touch on a general rule-of-thumb when it comes to nice girls vs. crazy girls. As Woody Allen and other men of the world will tell you, the crazy ones are better in bed. This isn’t an absolute fact, thank fortune, but my experience on the planet has taught me it’s more true than not. I regard this as one of the great unfair conditions about life. It is certainly something Gray should have gotten into, and the fact that he doesn’t even flirt with this is, for me, strike #1.

Strike #2 is the casting of Shaw as Sandra. She’s too Fairfield County pretty, poised and delicate to be a borough girl. There are exceptions galore in real life, of course, but men and women from Brooklyn and Queens (i.e., those born and raised) tend to exude a slight coarseness. A coarseness that’s often vibrant and agreeable (I know New Yorkers and it’s not a cliche), but is also saddled, I feel, with a lack of interest in other realms. A wanting for worldly finesse. An Adrianna-from- The Sopranos quality. Not to mention that happily hunkered- down attitude about being “borough” — a life of eating pizza, not quite dressing the right way and failing to learn to speak French or play piano. Not to mention the distinctive ethnic features and honky accents. (I’ve known exactly one woman in my life who was raised in Brooklyn but doesn’t look it or talk it.) 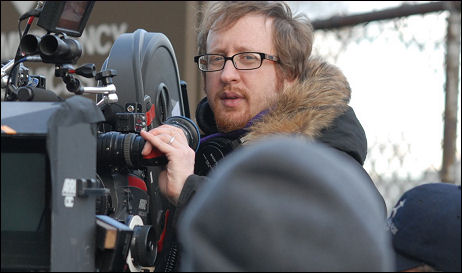 Shaw, simply, looks and talks like a girl from Greenwich or Westport or the Hamptons or Pacific Palisades. I’m a huge fan of this actress (as HE readers well know), but she’s too finishing-school to be believed here. Plus Gray and co-writer Ric Menello haven’t given Sandra enough in the way of distinctive ticks or weirdnesses. (Which everyone has.) They’ve settled for making her warm, generous, full of support and understanding. In short, a fantasy.

That said, I admired Pheonix’s performance — his best since Walk The Line, I feel. He convinced me that Leonard is just hermetic and naive enough to fall for a girl like Paltrow’s Michelle and not realize what he’s getting into. I think it’s fair to say that he’s starting to look vaguely 40ish — jowly, slightly chunky, filled-in. This is fine from an acting perspective, but a little curious given that he’s only 33.

2.12 Update: Pheonix is 34 now and look at him — a jowly, slightly chunky, bearded member of the rapping Taliban.