“Barack Obama is the most split-personality politician in the country today,” writes conservative-minded N.Y. Times columnist David Brooks. “On the one hand, there is Dr. Barack, the high-minded, Niebuhr-quoting speechifier who spent this past winter thrilling the Scarlett Johansson set and feeling the fierce urgency of now. But then on the other side, there’s Fast Eddie Obama, the promise-breaking, tough-minded Chicago pol who’d throw you under the truck for votes.

“This guy is the whole Chicago package: an idealistic, lakefront liberal fronting a sharp-elbowed machine operator. He’s the only politician of our lifetime who is underestimated because he’s too intelligent. He speaks so calmly and polysyllabically that people fail to appreciate the Machiavellian ambition inside.
“But he’s been giving us an education, for anybody who cares to pay attention. Just try to imagine Mister Rogers playing the Ari in Entourage and it all falls into place.
“I have to admit, I’m ambivalent watching all this. On the one hand, Obama did sell out the primary cause of his professional life, all for a tiny political advantage. If he’ll sell that out, what won’t he sell out? On the other hand, global affairs ain’t beanbag. If we’re going to have a president who is going to go toe-to-toe with the likes of Vladimir Putin, maybe it is better that he should have a ruthlessly opportunist Fast Eddie Obama lurking inside. 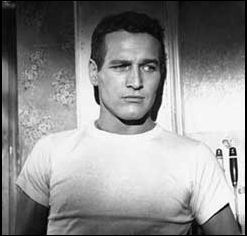 “All I know for sure is that this guy is no liberal goo-goo. Republicans keep calling him naive. But naive is the last word I’d use to describe Barack Obama. He’s the most effectively political creature we’ve seen in decades. Even Bill Clinton wasn’t smart enough to succeed in politics by pretending to renounce politics.”
Okay, Brooks — we all get the Fast Eddie analogy. But think about that Paul Newman character from The Hustler and the concept starts to fade a bit. Fast Eddie was a hustler, all right, but he was nothing if not morally and ethically bothered by who he was and what his life amounted to. He was obsessed with not being a loser, but guilt-wracked over having looked the other way when poor alcoholic Sara (Piper Laurie) begged hjim not to hang with the likes of Burt the operator (George C. Scott). And he ended up following her lead in the end, saying goodbye to the work of hustling and pool-sharking.
The truth is that we all have a little Fast Eddie inside of us. We’re all ambitious and opportunistic to varying degrees, but we all feel a little guilty about it, and the best of us take the high road at the end of the day.