“Why review [movies]? Why not let the market do its work, let the audience have its fun and occupy ourselves with the arcana — the art — we critics ostensibly prefer?,” asks N.Y. Times critic A.O. Scott. “The obvious answer is that art, or at least the kind of pleasure, wonder and surprise we associate with art, often pops out of commerce, and we want to be around to celebrate when it does and to complain when it doesn’t. 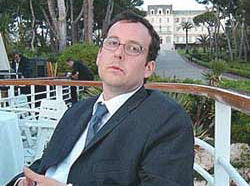 “But the deeper answer is that our love of movies is sometimes expressed as a mistrust of the people who make and sell them, and even of the people who see them. We take entertainment very seriously, which is to say that we don’t go to the movies for fun. Or for money. We do it for you.”

Not me, Tony. I like writing stuff that people read and respond to, sure, but I mainly write this column out of feelings of profound reverence and worship. Hollywood Elsewhere is about monk-like servitude and grovelling. The movie theatres of today aren’t as cathedral-like as they were in the 1920s and ’30s, but the faith endures. Every time I walk into a plex or a screening room it’s like entering St. Patrick’s on Fifth Avenue or Sacre Coeur in Paris. If you’re not feeling awe as you enter a theatre, why go? What is moviegoing if not a ritual about great possibility? The chance that something jolting or transcendent might happen?

I don’t think typical Pirates 2 fans have the same attitude. Some may see going to a just-opened movie as a kind of cathartic Southern Baptist service (talking back to the screen, letting it all out, etc.), but most people probably see movies as a kind of sporting event or mass video game or amusement ride. 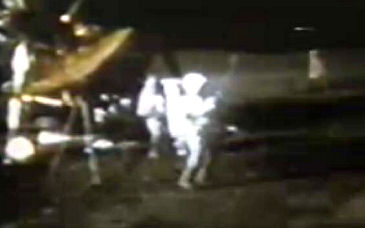 Astronaut Alan B. Shepard’s golf shot on the moon — February 1971

There’s an analogy between what I’m saying and Norman Mailer‘s feelings of reverence about the moon. During a 1971 promotion tour of his book “Of a Fire on the Moon,” and particularly during a visit to “The Dick Cavett Show”, Mailer sharply criticized astronaut Alan B. Shepard for hitting three golf balls on the moon’s surface during Apollo 14’s expedition, calling it a desecration of holy ground and a demonstration of American arrogance.

I think that today, 35 years hence, American moviegoers probably have more in common with Shepard’s attitude than Mailer’s. Movie plexes are a place they visit for temporary go-go diversion — places to meet friends in and eat popcorn and swallow soft drinks and check their text messages as they wait for the latest audio-visual blast-ride to begin. Nourishment, contemplation, meditation…? Dude, what are you on about?