Producer Jerry Bruckheimer recently announced in Vegas that Rolling Stoner Keith Richards will appear in the upcoming sequel Pirates of the Caribbean: At the World’s End, according to this Australian news story which got its information from a Variety story. 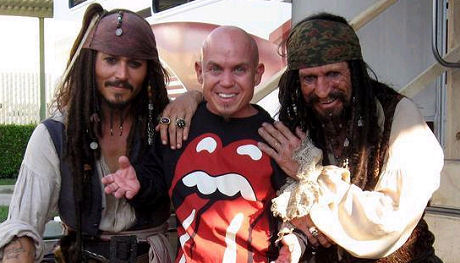 The story says that Bruckheimer’s statement “ends years of rumors about [Richards’] potential involvement in the popular swashbuckling franchise.” And Movie City News linked to the Australian story earleir today.
Has everyone lost their mind? Roger Friedman reported last September 21st that “a not terribly sober Keith Richards of the Rolling Stones has filmed his cameo as Johnny Depp‘s swashbuckling dad in Pirates of the Caribbean 3, which is shooting somewhere in Southern California in a place called Palmdale.”
Was Richards’ cameo filmed without final negotiations completed, and Richards’ reps were asking for more money than Bruckheimer and Disney wanted to pay, and they were ready to not use his footage if they couldn’t make a deal…something like that?